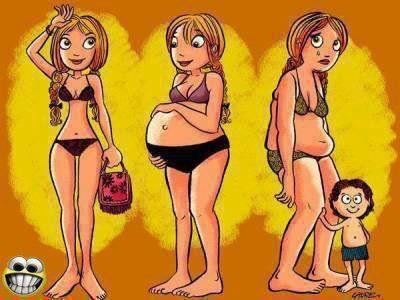 I remember a distinct conversation in my early twenties with one of my biggest fitness influencers (and former ex-boyfriend), Paul. We both became personal trainers around the same time and in our years together I would mention how scared I was to have kids one day. Why was I scared? It wasn’t the fact that my ‘privates’ would have to expand 10cm for a baby to come out, nor was it the sleepless nights or financial challenges of having children. It was exactly what this picture depicted.

I was scared of saggy boobs, stretch marks, weight gain and extra skin. While I absolutely believe that bringing a child into this world is one of the most amazing, satisfying and gratifying things you can experience, unfortunately you sacrifice not just your time spent with your husband or by yourself, money used for food, diapers and eventually college …but as a woman, your first sacrifice is your body. You house a baby in your belly for nearly 10 months. YES, if you haven’t been pregnant before you’re probably wondering where I got the ten months…we count our pregnancy by 40 weeks beginning on the first day of our last period…which means we probably conceived a couple weeks after and are pregnant for at least 9 ½ months.

So let’s backtrack a few years in my early twenties, at least five years before I conceived my first child at 28. I expressed my concern of having kids one day and he retorted, “Maria. You will never get that way because I know you would never allow yourself to.”

Of course, that annoyed me. Initially it made me feel like he expected me to always be in good shape. After not taking it too personally I got his gist – the truth is that the desire to achieve is so ingrained in me that if I was out-of-shape, I would work diligently every day until I achieved physical success. For example,  my hardest years in losing weight was actually right before I had children and not after. Between the years 2005-2009 my 5-foot-4 frame would seem my weight balloon to the 150’s. I would workout twice a day, eat minimal carbs, take diet pills and never drop an ounce of fat. My body didn’t trust me after years of struggling with an eating disorder (from 2003-2006/07).

My body didn’t start responding to proper diet and exercise UNTIL I gave birth to my first child. After I gave birth I continued my good eating habits and exercise. However, I wasn’t incredibly hard on myself and I had a  newfound respect for my body. I have to divulge on this ‘newfound respect’ because it’s important for all young women to hear…

In the past I would utilize my body to win pageants, attract men and feed my confidence. There was a point in my life when I truly felt objectified…by contest promoters, photographers, and even in the trusting heart of my former boyfriend… I lost a sense of ‘self’. In those years I became Bulimic because of several factors including my loss of self identity.

It wasn’t until a baby existed inside my womb when I understood the true power of the female body. Inside of me the miracle of life was happening – each day a baby formed from the strength of two tiny cells. For the first time I began to love my body, love its curves and reasons for being voluptuous, soft, and completely out of my control.

After being pregnant, I realize more fully how this lack of control I experienced in my body was just a glimpse of the life I would lead with three kids currently 3 and under.

Did I get stretch marks? Sure. Not a lot because I didn’t gain a lot – and I made sure to gain it slowly.

Did I gain weight? 35-38lbs each time, but I lost it all within six months.

Do I have extra skin? Yep – I don’t think my belly will be as taut as it was when I was in my twenties but it still looks pretty good despite the bit of extra skin.

While my body changed, my body WAS better. Sure it wasn’t as tight but it was pretty toned for having multiple kids. Sure I couldn’t spend hours training at the gym, but for what I did for one hour really mattered. Who I am today is of a woman who has evolved in body and mind.

After years of failed fitness efforts, I am now 123 pounds and around 15-17% body fat 11 months after my 3rd child. I attribute this to several things: 30% genetics, 30% environment and 40% willpower and desire to achieve. Is the above photo realistic? Absolutely! Is it preventable? I truly believe it is. I think if you are at a recommended weight prior, gain the recommended weight throughout your pregnancy and are able to maintain your good habits after – then it is possible. Many women falter in one of those three stages.

What are my top 5 recommendations for women who are looking like that first cartoon photo????

1)      Have good habits now. Many things in life is about good planning and while you can’t plan if you’ll have gestational diabetes, a c-section or if you’ll be able to successfully nurse, you CAN control how healthy you are before pregnancy. You control the foods you put in your mouth and the activity you perform. Most women in that first photo look good ‘naturally’…meaning they could probably still drink alcohol and eat unhealthy foods without gaining weight because their metabolism is still pretty high. The MAIN reason why I lost weight was because I had good habits prior.

2)      Gain the recommended amount of weight and don’t splurge while pregnant. I always tell people that you will lose 20lbs after giving birth but the rest is up to you! AND it is tougher with children to lose weight because you are constantly sleep deprived, busy, stressed and tired. (unless you have a nanny)

3)      Love your body. Love your body if it’s big, medium or small. If you say positive affirmations to yourself, your body will positively improve in that healthy environment.

4)    Surround yourself with a positive environment. “Like” positive facebook pages, join local mom groups that are active and affordable. Find your mommy role model. 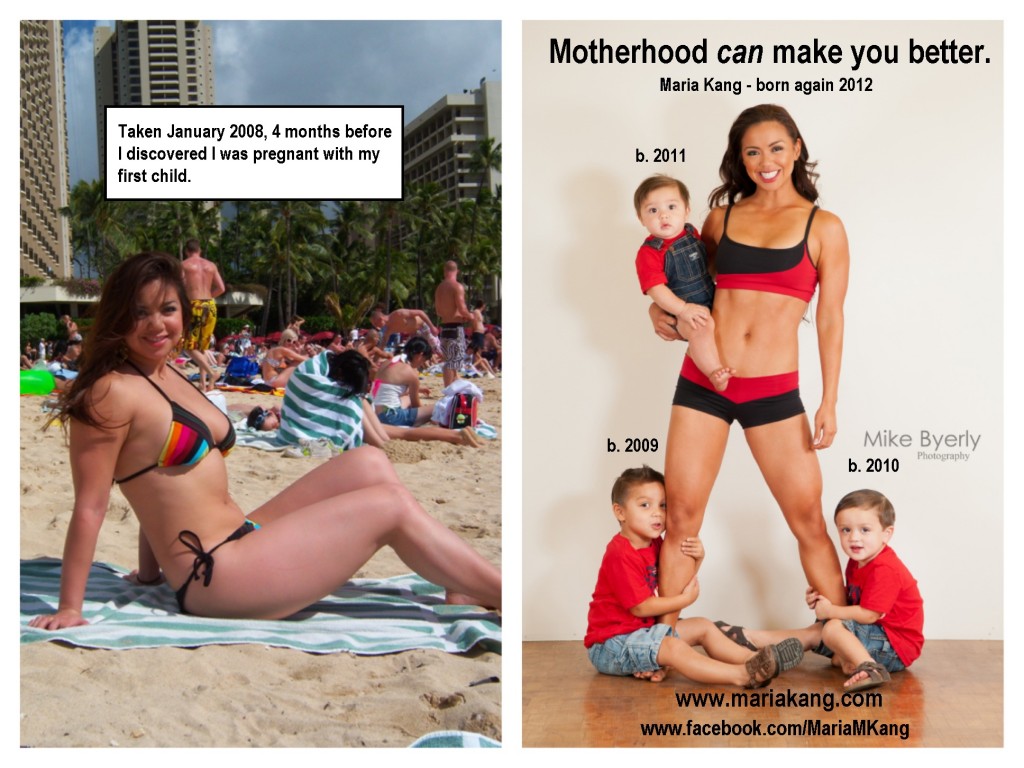 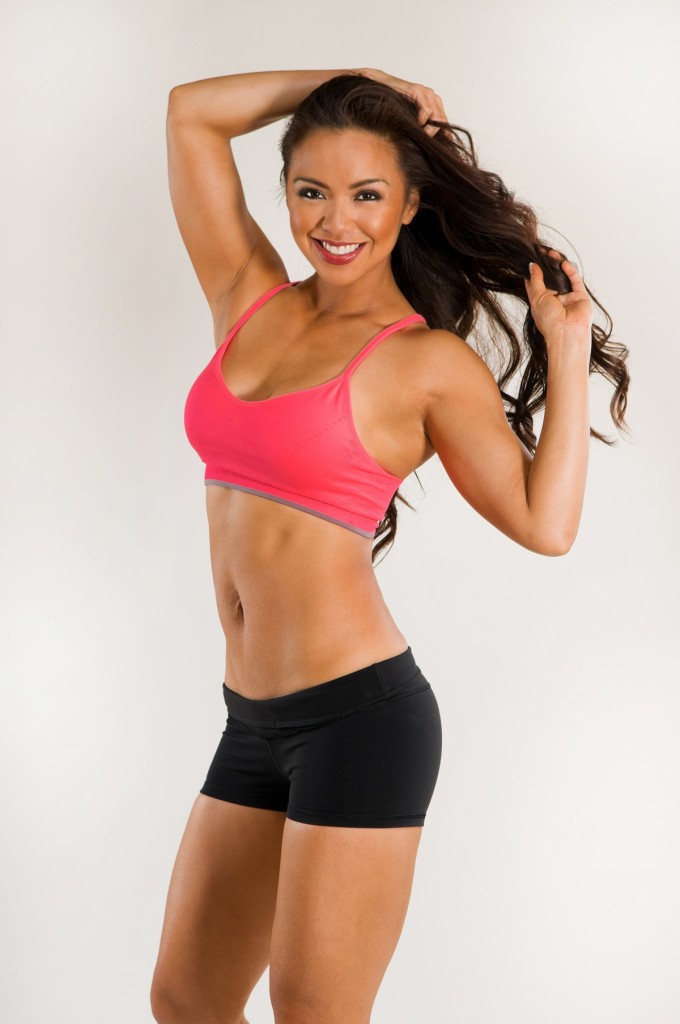 This was taken 8 months after my 3rd child