The “weight” of my world.

I can’t remember a time in my life when I wasn’t preoccupied with my weight. In my pre-teen diaries, I would constantly write about boys, chores and my weight. In elementary I began a morning workout routine of 100 jumping jacks and 50 leg lifts. In high school I ate the same lunch; wheat bread with lettuce and turkey, fat free saltine crackers, fruit and water. If I bought fries, my friends would laughingly watch as I blotted each fry with a paper napkin before consuming. In college I maintained my weekly workouts, which often consisted of kickboxing and step aerobics.

For most of my youth, I had only dabbled in strength training. I followed mainly a low-fat diet filled with various fat-free crackers, candies and bread. All of this changed, however, when I became a personal trainer at 20-years-old. I began reading about nutrition, human physiology and fitness training. I began training with dumbbells, cables and medicine balls. I began eating more protein, vegetables and nuts.

I witnessed my body become stronger, leaner and harder.

For the first time I felt in control of my body. I began competing again in both beauty and fitness competitions. In my first fitness contest, when I won Miss Bikini California, at 5-foot-4, I weighed 115 pounds. I decided to compete with a ‘softer’ look five months later in a national contest and placed top five in both the Miss Bikini America and Model America contests. I weighed in at 123 pounds.

I distinctly remember coming home from those contests and feeling incredibly accomplished. I was invited to come early to promote the show on ESPN. I was singled out for photo shoots, one of which landed a cover on Florida Fitness magazine.  For a newcomer I beat out over 70 competitors.  While I felt success, I also felt disenchanted. I scheduled two photo shoots before leaving LA, however, when I saw other competitors promiscuously model in thong bikinis at the pool, I intuitively knew that my body wasn’t being used for what it was created for.

I left in that moment.

When I arrived back to San Francisco I began my normal post-contest depression. I no longer had workouts or dieting to distract me daily. While I could choose another goal to reach and focus on, I also knew that someday that goal would end too – and then what next?

I began to aimlessly eat. Not because I craved food, but because I could eat food. After all, I wasn’t preparing for a contest. One time, I ate so many chocolate baking chips, I forced myself to throw up.  From that point forward, I binged (and purged) for various reasons: boredom, sadness or anxiety. Soon my routine became a habit I was fixated on for nearly 2-3 times a day, 4-5 times a week, for almost four years of my life. I was addicted to my pain. Most of all, I was addicted to an endless cycle of personal abuse. In this time I reflected, I prayed and I held steadfast faith that God wouldn’t create a mountain I couldn’t climb and that this experience was happening for a greater reason.

Most people think my Bulimia occurred when I was at my thinnest; it actually occurred after I was done competing and was maintaining a weight of 130. In this time I placed encouraging quotes around my house.  My bathroom mirror read, “Every day is a new Battle” and my bedroom mirror read, “Focus on Progress, not Perfection”.  I began to mindfully eat and eliminate the ‘rules’ I placed on myself in prior years.  I didn’t count carbohydrates. I ate fruit passed 3pm. I had one or two or three ‘cheat’ meals throughout the week. I learned to nourish my body, listen to my body and most importantly, love my body. In this healing phase, my weight ballooned anywhere from 143-150 pounds. I resisted weighing myself because I didn’t want my sense of self worth defined by a number on a scale.

While I was still eating well and training 5-6 times a week, I wasn’t seeing the fast results I once saw in my early twenties. I knew that my body was recovering from years of abuse and needed to stop ‘storing’ food in my fat cells because it feared I wouldn’t feed it. I knew that in my knowledge and experience in fitness that if I followed a specific route, which is calories in…calories out, that I would eventually lose weight. I also knew that a balanced diet and lifestyle was key to my recovery and I could no longer be strict or obsessive.

I settled in my belief that my healthy lifestyle would eventually breed a healthy body – and that I would accept my body however it physically manifested.

My body manifested (and settled) at 143 pounds for a couple years…one of those years in which I met my soon-to-be-husband.

I fell in love with him at one of my most humbled, yet spiritually happiest moments of my life.  In these last three years I gave birth to three sons. After each birth, I successfully lost the baby weight and more. My husband jokingly says that if we have more children I might disappear. I don’t diet or exercise excessively. I don’t count calories or track my carbohydrates.

I just eat when I’m hungry. I stop when I’m full. I eat natural and whole foods and drink lots of water.

I love my body.

I loved it when I was 143 pounds…when I had a huge baby bump at 170 pounds and right now at 130 pounds less than 4 months after giving birth.

When love is the driving energy in your life it’s amazing what manifests in that environment. Now, when dressed in my standard pajama pants and sports bra, I love looking at my shrunken belly – sure it has a bit of extra skin and faint stretch marks…but it reminds me of what my body was truly created for. 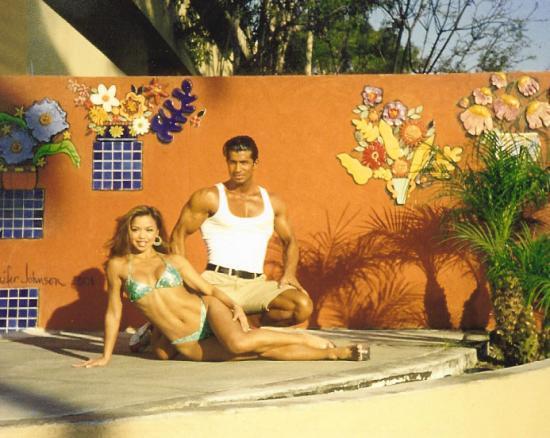 This was taken before Nationals in 2003. This pre-contest look requires tanning, low sodium and little water. One of our shots became cover of Florida Fitness. 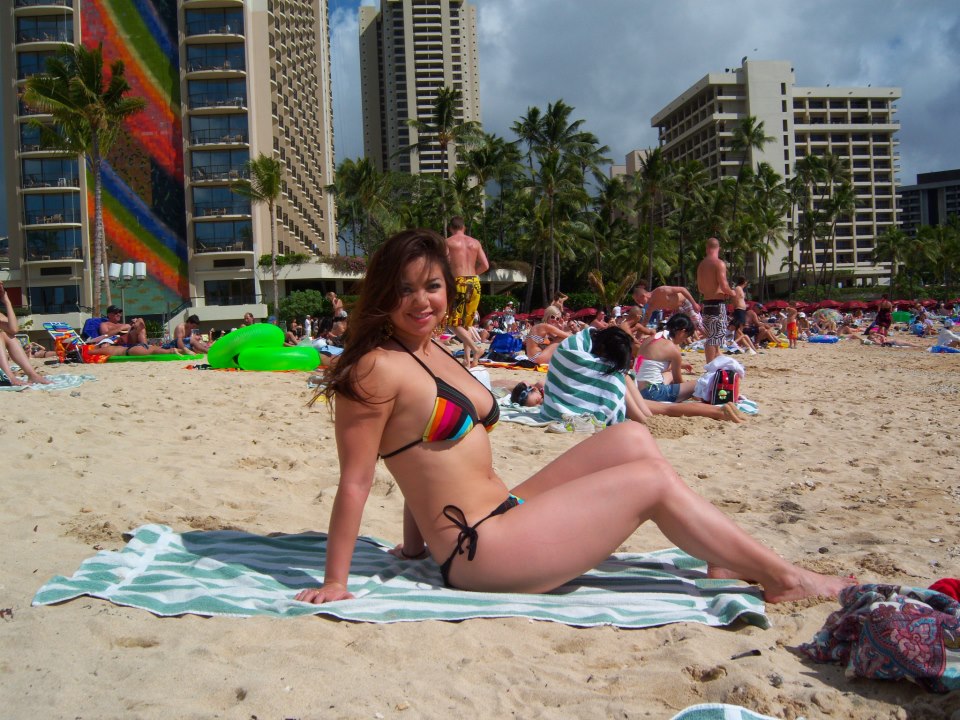 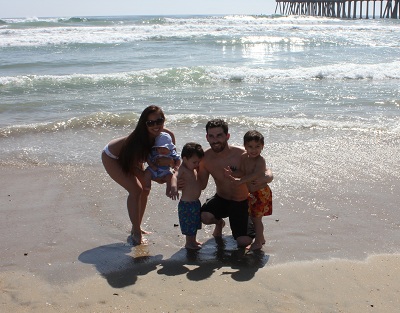 We went to LA last week. This is our family shot at Huntington Beach. We also went to Disneyland. 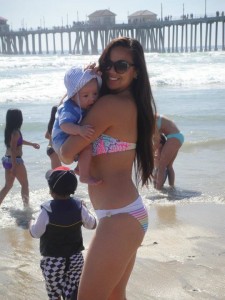 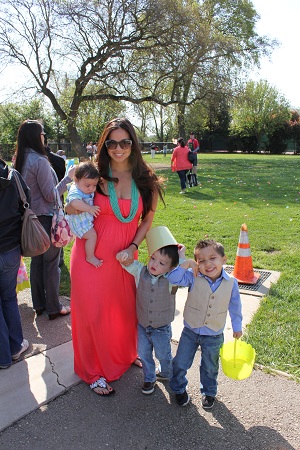