The Truth about Fitness

So while running on the treadmill this morning, I get a call from my long-time friend and fitness industry buddy, Dave Slagle. We met nearly ten years ago when I attended the San Francisco Pro Show at the Palace of Fine Arts in San Francisco. Since then, he has been a constant fixture in my life, supporting all my endeavors and motivating me to be the best “Maria Kang” I could be.

So he calls me while running – which is at an opportune time because my sons are fighting nonstop, distracting me from finishing my run. (I was at around 2  miles, the goal was 4) The first thing he says is, “I just read your blog and it’s so annoying.” (He finds it annoying whenever I’m hard on myself) He then precedes to tell me that I look fine (which he tells me all the time) and that it annoys him when I start talking so strictly about food (he  has lived through  my Bulimia with me). As a fitness veteran he started explaining that the people I look up to are mostly on drugs. (Many fitness people use steroids and illegal fat loss enhancers) He also said that for a mother of three young boys I was not being realistic about what fitness means in the real world. (since I, like many others, use fitness magazines as a gauge in my own personal fitness profile)

–          People who are top fitness competitors (especially in the bodybuilding world) use drugs.

–          Fitness models in magazines tan and deplete their water and carb intake to look incredibly lean.

–          Most published photographs are doctored and unrealistic.

–          Most fitness ‘role models’ who are models are paid to be fit, in this case, I am NOT getting paid, I’m just trying to  be fit with three boys, a business and other contracting jobs.

So it was a good conversation. He always makes me feel more accepting of myself. In the end he said, “Maria, there is no set definition of what makes a perfect fitness program. As a biker (he is an endurance biker), some people eat a piece a toast the whole day if they are inactive, other days they eat 10-12,000 calories!”

As a mom, I just want to be the best I know I can be. That means choosing healthy options when I can eat. Working out intensely when I can workout…and trying to get enough sleep even though my 7 month old still wakes twice a night and my middle child is sick right now.

So – thank you Dave Slagle. While I was on the phone, my eldest son, three-year-old Christian, captured our conversation on daddy’s camera. This is me on the treadmill, talking to Dave using my earpiece. I guess I don’t look THAT bad. Haha. 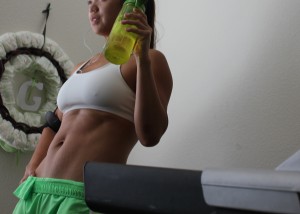 My abs (and running outfit) 7 months after giving birth.