Turning the other Cheek

I met my stepdaughters when they were six and eight years old. They greeted me in their school uniforms and we went to go paint at a small pottery place in Mississippi. Since then I have witnessed them blossom year after year. This past summer we enjoyed so much activity, the biggest activity being the time spent at the gym. Right now I’m slated to go workout, but I fear I might have an angst of loneliness when I enter California Family Fitness knowing that the eldest won’t be accompanying me to the locker room or the youngest won’t be requesting if she can rock climb. Funny what you miss when they are gone.

When they left yesterday morning I felt sad, after all, each year they become more mature. I love watching them try on my old cheerleading uniform and feeling like a princess in one of my evening gowns. As a mother of three boys, it’s wonderful to have daughters whom you can braid hair, bake cookies and play ‘pageant’ with. Having stepchildren isn’t easy of course. Developing a relationship is very difficult, especially when you see each once a year, and definitely when their parents are often in disagreement.

As children I can only imagine how difficult it is to understand the devastation behind a divorce. After all, there are always two sides of a story and the one you listen to, is the side you hear most often. I don’t think anyone is purely innocent when marriage falters, but I do believe that respect, love and fidelity, are important factors that when broken, are very hard to mend.

When I first met David he was undergoing a challenging court battle with his former spouse. I knew immediately that this was a situation that I didn’t want to be involved in. I stayed because I loved him. His courage to stand up and protect the innocence of his child by sacrificing his own plea, made me respect him as a father. Little did I know that the incident would symbolize who he is in this process of maintaining a true and consistent relationship with his children.

In our Christian Faith, it says that “… If someone slaps you on the right cheek, offer the other cheek also.” In the past it frustrated me how David would allow someone to slander him and continue to be nice in the next conversation. He has been restrained from seeing his children, falsely accused of not providing support and even told he didn’t send birthday gifts(when he has) and yet he continues to be kind for the sake of one thing only…..his kids.

As a person who is consistently attacked for invalid reasons, I know that while turning the other cheek is difficult, in the long run, it is the aggressor who eventually deteriorates. While I would like to truly express how I really feel about people who annoy me, in the end, as my husband always says, “It’s not worth it”.

The negative energy expelled when dealing with negative people is never worth it.

So right now I miss the kids. While there are things I wish we could resolve in our overall relationship, I know that right now, it’s not worth it. What’s worth it is them knowing that the love and support of both their parents are the most consistent thing in their life. They will be loved regardless of how they feel. In the end, it’s not necessary to choose who to love, but to know they are blessed because they are loved. 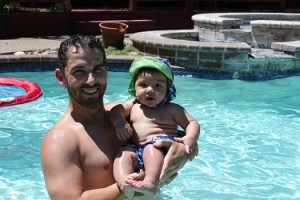