Mommy Fitness Blog: We are pregnant for the 3rd time!!!!

Yes, you read that right. My husband and I were so excited when we found out we were expecting again a few weeks ago. Since January, we’ve been contemplating expanding the family. We both agreed that we wanted another child and it seemed rational to have them all close in age. After all, if I wait a couple years, I might feel like I need two more since my first two are so close in age! As I have mentioned tons of times on this site: I was getting into fabulous shape and was considering utilizing my firm physique to compete and model again, but I also knew that in doing so, I would lose the opportunity to expand our family. (which we would like to do sooner than later)

So I decided on family!

Right now, I’m not eating as strictly as I was and my workouts are not as intense. However, the intensity of my workouts started changing when my back started hurting almost two months ago. I still train anywhere between 5-6 times a week though. Yesterday I performed bleachers with a girlfriend who had lost an amazing amount of weight since I last saw her! She looked so amazing and I’m so proud of you! (Sanaz! 🙂 I also ran into another fitness gal pal out there on the tracks! I LOVE training outside and seeing and meeting new people! We ran a mile, sprinted bleachers, performed a lot of jump rope exercises…it was a lot of fun. (I guess my idea of fun is MUCH different from other people’s!)

I had a great workout this morning. It was light. Me and my girlfriend, Andrea, only performed lower body exercises (even though I was still sore) and I had time for only 20 minutes of stairmaster. I had only 4 hours of sleep last night because my husband and I were up talking late. Funny because while he was bathing the kids, I literally fell asleep on Christian’s bed exhausted, but knew I had to get up because I needed to shower and brush my teeth. Even though I wanted to just kiss him and go to bed after bathing, we ended up having a long talk – something I think every couple needs once in a while. It reminded me of when we first started dating and would talk to each other late into the night without a care of what was expected of us the following day.

It’s 8:30am right now and I’ve been up sine 4:45am! I received an early phone call from one of my employees that a resident I knew was close to expiring, passed away…so there I was, AWAKE – and decided to get out the door before Christian wakes up and forces me to stay home. (If he DOES wake up while I’m away, he just sleeps with David in our bed, but if he sees me leaving, he will cry and won’t let me go) In an hour I will be leaving again for my mom-me fitness group. While I sometimes don’t want to attend (and stay home and take a nap or something) I STILL go because I know how much my kids love playing at the park.

I’m around two months along in my pregnancy – I do feel extremely tired at times and I definitely have gained a bit of weight. I weighed myself yesterday and found that in the two weeks I had avoided the scale, my weight increased 3 pounds!! OMG! I was so annoyed by that. I ended up going around the house and throwing away all the junk food and secret candy stashes I keep in the garage. LOL A lot of this COULD be water weight gain and extra blood flow because I run ten miles and not sweat. The water just doesn’t want to come out of me!!!

I am NOT excited about gaining weight again. Don’t get me wrong, I LOVE being pregnant and creating a child in me – but the pain your body goes through as well as the extra weight you carry really sucks. (especially with a bad back)

Since it’s Friday, I don’t have many goals ‘this week’ as I have completed it all (i.e. train every day, run, etc) but I do want to start writing in my food journal again and eat well this weekend since we will be attend THREE birthday parties! OMG!

This is a shot of me and Christian at my bowling event with my mom-me club last Friday! 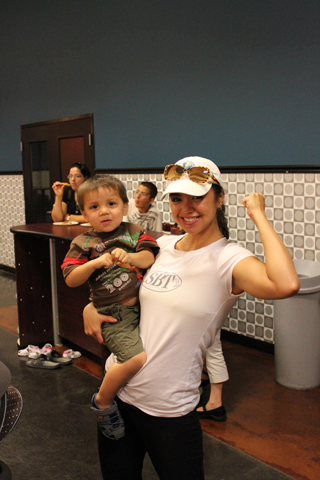