Last night I had NO sleep. Both babies are teething. Christian has had a temperature these past two nights and for the life of me, Nicholas can’t be pacified unless I’m rocking him WHILE standing. I wanted to work out early this morning but couldn’t because I fell asleep at 4am. I had only 2.5 hours before my school program began. I didn’t train on Monday either. I was scheduled to do it in the evening but I attended a meeting that lasted an hour longer than expected. By the time I left, I was hungry and tired.

So – MY goal today is to workout. Simple, right? Not so much when you are somewhat of a “gym snob” like myself. I HATE working out at night. Not only is it busy, but it’s humid and smells. It’s just different at night versus the morning. I also don’t like to train when it’s sunny outside. I’d rather be at the park or somewhere not inside a gym. I have to train during certain times during my meal intake too! I can’t train right after I eat or if I haven’t eaten in a long time. I need to space out my workout so I’m working out with enough fuel in me, but not too much. Lastly, I don’t like training if it’s past a certain time at night. I don’t like having insomnia because I sparked my energy too late in the day. For me, after 7pm is late. (unless I’m taking a class)

I did really well last week though. I woke up most days at 5am to train – I actually was very proud of myself! The only unexpected rest day was Saturday…we were going to the gym as a family only to find out that the kids club was full. So we decided to go to the mall instead! I had a very relaxing weekend, which is very different from the weekends I’ve been having for the last four months. It was a welcomed rest time…but of course, I find myself seeking things to do.

I’ve made new fitness goals. I’m actually seriously considering competing again. I just feel like I need motivation and a timeline…and I know contests do that for me. Funny since I told myself I wouldn’t do it again. My abs look naturally good. I say naturally because I rarely work them still. I have some loose skin from my pregnancies but my tummy looks tight overall. I can see my butt developing so that’s exciting….

As I type this I am seriously in zombie mode. I”m going to take a nap.

It’s 1:39pm, I just fed the babies lunch…we had our mom-me club this morning and the school program before that. And I had no sleep.

I’m going to lay down now. 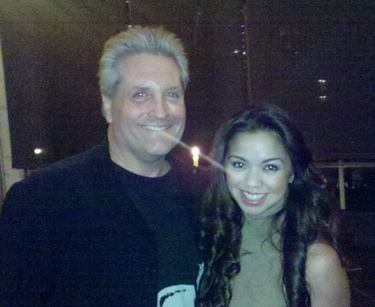 With my friend Mark Sackett at his “Active Networking Event” at
his event place, “The Box” in SF.