I wasn’t able to workout this morning – or attend my fitness program…(I don’t teach it, I just show up when I can to help facilitate) Last night, both babies were in a fuss. Christian didn’t sleep until past midnight and the other one is suffering from a cold and fever. I woke up every two hours and by the time 5am hit, I wasn’t ready to get up. So… now it is almost 2pm on Monday. I plan on working out later this evening. I may have to take them to the kids club as I’m not sure if I will have a babysitter. If so, it will be the FIRST time Nicholas is there (and probably the fifth for Christian, I try not to take them there too often due to germs.) Nicholas is now SIX months now~!!! Which makes him eligible to be there 🙂

My diet and exercise has been a good 8/10. I haven’t weighed myself in the past week because I am premenstrual, but I’m pretty sure I’m at my last weight or lost a pound. I’ve been really good about making Monday and Friday my primary glutes day – I’ve also been trying to incorporate running but was suffering from a shoulder injury mid-week, which made it really hard to run. I ended up only doing 4 miles total – the week before that I did 9 miles. I have been consistently training 5 days a week. Usually I train on Saturdays, but for the last couple weeks its been impossible. This past weekend we had a marriage preparation course with the Catholic Diocese and the week before that I had a First 5 event downtown that I volunteered for. This upcoming weekend is my sister’s baby shower, the next weekend is my Halloween party, the weekend after that is my Bridal shower AND my Bachelorette party. It is going to be CRAZY to say the least. And the first thing that pops into my mind with all these events is “Don’t eat too much!” LOL.

In terms of eating, I usually splurge once a week. And when I mean splurge, I mean sushi and frozen yogurt, or a sandwich at Mr. Pickles…or some pieces of cookie or a soy vanilla latte. Really nothing big like a Big Mac Meal with fries or chocolate candy bars all day long. I probably don’t eat over 2000 calories on my ‘fat days’. I used to though! When I was younger and just started training, I used to eat clean all week long, then “splurge from midnight to midnight”. I would eat everything I can and then feel bloated and gross afterwards. Thank GOD I am over that.

SO my workouts this week will be pretty much the same thing – except, I am REALLY going to focus on running 10 miles total and also include more ab training. (which I usually do only once, maybe twice a week.) In my mind when I train, I think:

I only have about five pounds to lose before my wedding (which is my last competitive weight of 125))….when Nicholas is a year old, I can’t imagine the shape I will be in considering I’m trying to get into awesome shape only seven months after giving birth. It’s great to be a good role model for mothers who want to get back in shape or women who are scared of becoming mothers because of what motherhood does to your life.

Right now I’m at home – which is where I’m usually at this time of day. I feel absolutely blessed to be able to work from home so I can be the primary caregiver to  my kids. I know that most women don’t have that luxury so I can’t explain my gratitude that I was able to build a life that affords me this single luxury.  Of course, sometimes it doesn’t feel so luxurious. Especially when they are both crying. Or when I’m working and I’m constantly interrupted. BUT it is more wonderful than hard.

Some of my celebrity mommy role models are:

Bethenny Frankel: she had a premature baby and looked awesome within weeks!

Kelly Ripa: she is so amazingly fit!

Besides all my training goals, my biggest goal is to eat less at night and drink lots of water and create a consistent routine.

Here are some pics of training at the bleachers! It was so HOT that day, I got a tan really fast 🙁 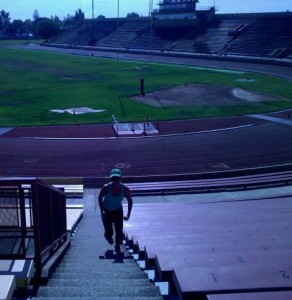