Last week I was killing it on the workouts. I trained five days, worked on my core and was feeling sore nearly every day.
This week, however, is a different story.

It all started a few days ago when a wave a nausea came over me. I know, I know…please don’t say I’m pregnant. Is it possible – maybe. But last time I felt this way, I got my period for the first time since delivering. That was a month ago. So I am hoping that my period is coming soon. My period is not normal yet though because I had it again two weeks after the first time – so who knows when I’m supposed to get it!

I just HOPE I’m getting it soon because I’m feeling bloated, yucky and gross.

Hence, my workouts have sucked.

Monday I worked out with a friend. We did a great lower body plyometric workout. On Tuesday I performed a 20-minute core workout with my mom-me group. I didn’t get to the gym though.

Today, I was unmotivated AGAIN.

I was feeling gross. I woke up late. I had some PMS symptoms of annoyance, anger and hopelessness. Yes. Hopelessness.

And after a long day of working and being with the kids, I told my husband that I wanted to take the kids to the park so I can also run while the children played. You see, I also feel guilt leaving the kids. Especially if I was already out prior because of work-related reasons. So this was an EXCELLENT idea. We went to the park around 7pm. I began running and performed sprints with my interval training and now I feel awesome.

Tomorrow morning I am going to try Crossfit training for the first time. I know a lot about it since I have friends in the business and I’ve written articles about it. However, I’ve never tried it myself. IT will be interesting! I decided to try it because a new studio opened so close to my house. My girlfriend, Tiana, also trains there in the morning. I keep reading her posts about her morning workout on facebook and it was making me jealous. (I have not once woken up early after having Gabriel to go workout) So we will see! I am excited. I stopped in today to say hello and get some information about the gym. I also warned them about my personality. Before going I told my husband, “I really want to try Crossfit but I’m concerned about two things: Firstly, I don’t like heavy lifting. Secondly, I don’t like people telling me what to do.” haha.

This past weekend we celebrated my second son’s 2nd birthday! It was a very stressful day (as usual). I rented a bounce house, had a magician and balloon animals. We rented tables and even had miniature chairs and tables for the kids. Like my mother I ordered too much food, I had three large trays of Subway sandwiches at the end of the day…but overall, it was a great day. The sun was out. (Thank God) and everyone said that I looked awesome. That’s always nice to hear!

I haven’t lost any weight since last week though. (my goal is to lose 5-7 more pounds) Actually, to be honest, I haven’t weighed myself mainly because I feel so gross and bloated that I don’t want to be disappointed.

IT doesn’t help that I eat crappy when I feel crappy either.

See! I am human! I ate some Pinkberry yogurt last night and some potato chips throughout the day. I admit it!

So, my hope is to start feeling better again – working out – eating right – and trying to think POSITIVE thoughts. 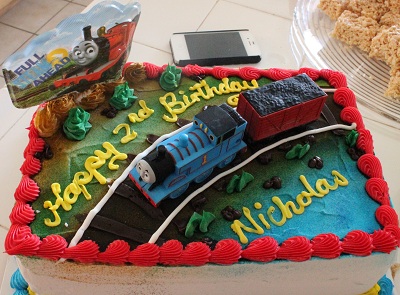 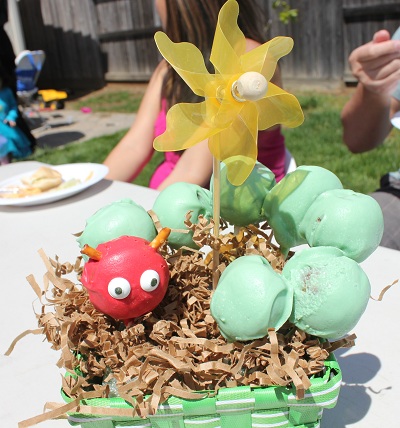 I made cake pops for the centerpieces! 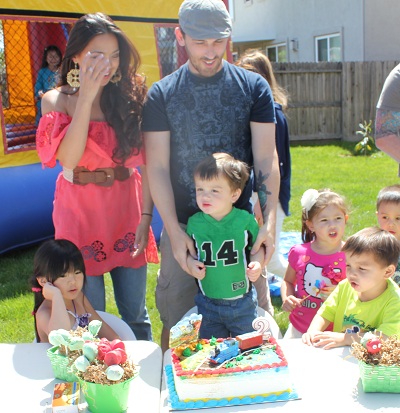