My shoot was Saturday. Today is Tuesday night. It’s been a whirlwind since then.

The day of my shoot was great. I didn’t sleep as great as I had hoped, but it was enough to relieve me from having red eye or bags under my eyes. I met my photographer at 6:30am so we could shoot at the first hours of sunrise. I shot in three different bikinis. I didn’t buy the bikinis specifically for this shoot. I actually bought them a few years ago when I daydreamed about shooting in them one day! Isn’t that surreal! I finally get to shoot in my goal swimsuits.

It was cold. There was some wind also, which made it more unbearable, but not bad enough of course. I think it’s funny what goes on behind a perfect shot. There’s so much preparation, lotion, tanning, oil…and you never know how uncomfortable the model is.

Speaking of preparation, I decided to do my own hair and makeup. This is my controlling side coming out. Ever since I was little, I loved to play with makeup. I bought make up books by Bobbi Brown and Tyra Banks (when she was a popular super model) and studied how woman applied make up in fashion magazines. Since then, I always applied my own make up during competitions, pageants and photo shoots. I didn’t even have one at my own wedding! This may change in the future. My key thing is that I need to trust the makeup artist and usually you don’t work with the makeup artist that’s near the location prior.

I was very nervous about applying my own make up of course. I kept googling ‘make up tips for photo shoots’ constantly. My biggest thing was making sure my foundation matched my body (which I spray tanned a day prior to the shoot) and ensuring there were no areas that would reflect light on my face. I woke up at 5am to get ready. We left for the shoot at 545.

Speaking of spray tan, (I know I’m always getting off tangent when writing without organizing my thoughts first), I had my first experience last week and I  must say: it’s not THAT bad. I made sure I shaved everything first. (Even though I rarely shave because I don’t have a lot of hair) and I applied lotion on feet and hands. They made me step into a booth, press a button and then stand with my back facing the spray. When the spray started hitting it was a bit cold, a little scary, I didn’t even know if I should breathe! After it stopped, I had to turn around and have it spray me in the front. As soon as the 40 seconds were over (short, right!?!) I stepped out because it was misty and I hate inhaling chemicals. I wiped the excess paint off of me and was dry within a minute. I wore an empire waist  maxi dress with no bra or panties so that nothing creased. I didn’t shower that evening. The whole process cost just $25 and they said the tan would last 5-7 days.

Going back to the shoot – we shot outside for a couple hours, then decided to head back to the studio. I DO remember somewhere around the halfway mark feeling incredibly cold and chilly to the bone. It was in that moment when I think I got sick. After shooting indoors, I took some shots with my crazy sons. Thank God, my friend and babysitter, Alma, was there to assist with my husband. Bless her heart! She came to my house at 5:40am in the morning! When we were done shooting, all I wanted was a soy vanilla latte. Of course, even though I was starved, my husband waited until we drove ALL the way back to Elk Grove, (which is 40 minutes from where we were) to buy me a Starbucks latte. He ordered a chai latte in addition to mine, which didn’t fly very well with me, which you could read here.

I didn’t have a list of foods I wanted to eat after my shoot like I usually do when I complete a fitness goal. In the past I wanted to go to a Mexican restaurant or have desserts. In fact, weeks leading up to the shoot I researched all the different cupcake restaurants in the area. LOL. The things you do when you try to look forward to the end of something!

However, when you are THIS close to the end, all you can think of is getting every day done. That’s how I felt a week prior to the shoot. My husband was hardly around so I had to organize my schedule days in advance. I felt like I was in ‘flow’ like a machine. I LOVE that feeling.

Of course, that feeling ends when you meet your goal. And so here I am.

The one thing I know I about myself through past goal setting is that I normally get depressed after I hit a goal. That means after I end a vacation, after I finish an event, after I’m done with a fitness goal, etc. This is the case for MOST people. This is an example how happiness is in the process and not necessarily the destination. We like to be in ‘flow’ with our lives, challenging ourselves little by little each day.

So since Saturday I have done the following things:

–          I slept most of Saturday – mainly because I was SICK from posing in a bikini at sunrise. I had a fever, body aches and chills. It was NOT a good thing. I also had an allergic reaction to lactose after drinking my hubby’s chai latter. I didn’t splurge on anything unhealthy really. I was going to mention I ate some pizza from Pizza Hut, but I threw up because I was nauseous.

–          On Sunday we had church and went to a buffet after as we normally do. I had my normal salad, I added some desserts but not a whole lot. This is an example of how we are creatures of habits, so make yours good!

–          On Monday it was my hubby’s birthday. We went out for lunch. We initially wanted Indian food but our time was limited because my mom was watching the boys and we wanted to watch a movie. So we had some all-white-chicken pho. For dinner we ate at Logan’s where I splurge on some fried appetizers. I ordered chicken, rice and veggies (I really don’t like many other foods…or maybe I force myself to like this particular food that I’m used to it) However we ordered an incredibly delicious cake  from his favorite bakery and eating just a small slice made me want to fall asleep.

–          So today is Tuesday evening. I ate fairly well. I had an egg white sandwich for breakfast and had a lunch meeting at the Cheesecake factory. So what do I order when I’m there? I usually opt for the Ahi tuna salad or Luau salad. They are delicious! Dressing on the side please! I cooked fish, veggies and pasta for dinner. I had a small bit of each, BUT I splurged with a sliver of that leftover cake, which even a sliver made my heart race because of the sugary goodness.

Tomorrow I plan on eating cleaner. Every day my goal is to eat a little cleaner. This goes back to dieting being a progression. I DO plan on reaching my next fitness goal, but I need to give my body (but more my brain) a break. So this week is my break time. I don’t plan on being really serious until next week. In fact, I haven’t even trained since Thursday. That’s a huge deal. I probably would’ve trained today, but to be honest, I’ve been sick. I’ve also been really sore. I want to admit I’ve been nauseous as well but then I will be getting all the pregnancy jokes.

My goal this week is to: 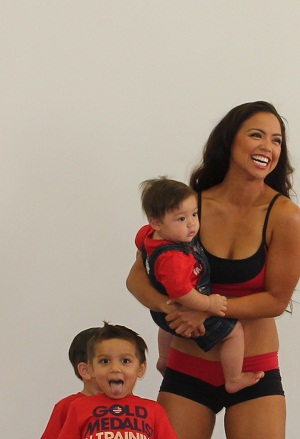