So I woke up this morning thinking…I want to do yoga! After all, I’m really trying to incorporate yoga into my daily routine. I’ve definitely committed to it on Mondays and I’m thinking of joining my girlfriend tomorrow for yoga at the gym. Most of my yoga workouts have been at home following a DVD or Exercise on Demand. This time, I chose the yoga on Exercise On Demand with Bethanny Frankel. It was great – I wasn’t sure how I’d like it with her voice in the background (since yoga is supposed to be soothing and she has that New York accent that is a bit hard) but it wasn’t too bad! I was expecting her to make wise cracks most of the time, but she actually wasn’t THAT bad. Don’t get me wrong. I really like her – after all, that’s why I chose her workout!!

On with the story…so there I was trying to perform a tree pose, while I have two little monkeys (my sons) trying to swing, push, and pull me and every direction. There were also points in the workout when I was performing a Bridge (see and example in the picture below) and Nicholas starts crawling and playing underneath me! Imagine me in an uncomfortable pose, trying to stay strong (literally!) because if I drop, my son will most definitely get hurt.

I have had the longest week with my boys. We called 911 twice. First was because Nicholas locked himself in my car (he grabbed my keys and began chewing on them because he is teething) I closed the door after strapping him in (forgetting he has my keys) and all of a sudden, I hear all the doors lock! Luckily, this occurred at my mother’s home at 9pm at night. Nicholas was a bit agitated but mostly sleepy. When the firetrucks came I felt SO much better. The fireman comforted me saying that it happens all the time and in fact, it happened to him three days ago!

The second time I called 911 was when I was at the bank the other week and Christian fell and hit his head against a filing cabinet. He ended up having four stitches from a cut resting on the center of his forehead. It was really difficult when the incident first occurred because blood was literally streaming down his face. My husband grabbed a diaper and tried to apply pressure while Christian wiggled and cried! I couldn’t even look….granted, I am awesome in emergency situations – but when you see your son bleeding like crazy, it’s the worst sight in the world! For all you mothers out there with spunky sons, know that there are a lot of capillaries in the head and that if a head injury were to occur, there will be a lot of blood present!

Anyways – if you can imagine, I’ve had a very stressful week. In addition to all this, my back has continued to ache. I made an effort NOT to workout and just perform light cardio exercises all last week. I was supposed to get my period late last week, which probably added to the back ache. I haven’t gotten my period yet, so….??!!!!

My husband and I have talked about expanding for a while. It makes me hesitant since I really enjoy having a fit body again. However, I also know, that if i don’t do it NOW, then I will feel like I have to have two kids because the gap would be too great between the third child and the first two. Lastly, I also know that it’s not a matter of ‘if’ I will get back into a prego body but ‘when’…so I might as well focus on childrearing years now and modeling/competing when I know I am absolutely through having kids.

I’m sure a lot of women question when they should have kids in addition to the timing, the spacing, the everything…and here are my thoughts:

– It’s better to have kids young. It’s healthier for you and you lose the baby weight faster

– It’s better to have kids closer in age because they grow up together and have a playmate. Also, you can deal with diapers ‘all at once’ instead of having to ‘go back’ to infant stuff after taking a long break in-between kids.

– You can NEVER prepare mentally for a baby…a lot of people want to ‘wait’ for the ‘right time’…but it’s never really right. You make it right when it happens!

– If you want to be a fit mom – you have to be fit before you get pregnant. Bottom Line. A lot of women envy fit moms and compare themselves but they don’t think about how they looked before they got pregnant!

– If you have kids close in age, lose weight before you have the next child so you’re not constantly adding on the pounds

– If you say “I don’t want kids RIGHT NOW” you’re not thinking about the future. I have a lot of friends in my life who put off having kids…some like to party, others focus on their career, others just don’t want the responsibility. BUT they are not thinking ahead of time. They are not planning – they are living in the ‘now’ – which of course, now is okay, right?! Well, it won’t be when you’re much older and you can’t have kids, or the risk of having  an unhealthy kid is higher. They also think that when they ‘start trying’ that they will instantly get pregnant. Most of the time, it takes months, maybe a year to get pregnant – so…there goes ANOTHER year that goes by!

– It’s a challenge and a reward to be a fit mom. I have a lot of fitness role models, but 90% of the women I love looking at in Oxygen magazine have never had a kid. In fact, I know some of them are getting riper in age and still not willing to sacrifice their perfect physique and great modeling career to have a kid. SO, I’ve made a goal to be THAT mom.  You know…the one running with their kids  and family while they are both on bikes with a husband strolling another kid in a camper! Yep, that’s going to be me. 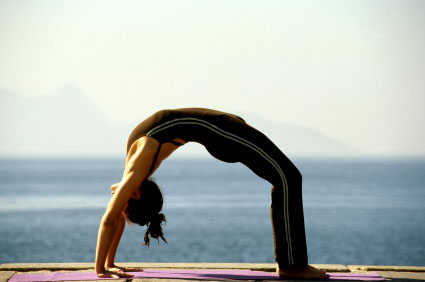 Here’s a pic with me, my two sons and my little nephew, Jason! This was taken right before christian hit his head! 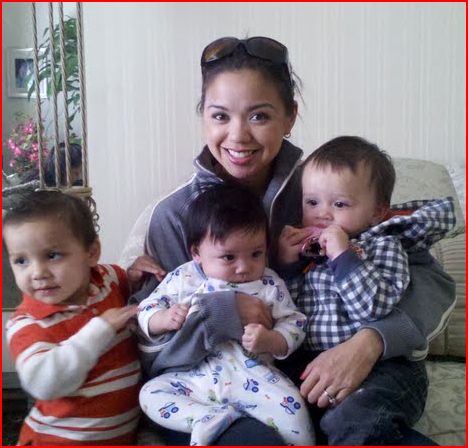