Mommy Fitness Blog: sore BUT not working out…

I have been literally going, going and going for the past two weeks. THAT is why I haven’t been able to to update this site. In fact, tonight I have a Halloween party that I’m still not fully prepared for. AND I still have to work today in addition to preparing so that is definitely not going to help.

In regards to working out – I haven’t been waking up at 5am mainly because if I could get an hour of more sleep in the morning, I try to. I do workout later SOMETIMES..but even though I don’t workout, I still feel sore! I feel sore from the weight of my belly getting heavier, from moving things (in preparation for the party and other things) as well as my mom fit club workouts.

I had an early glucose test done (as I am 16 weeks pregnant now) and I was nervous that they would say that I had high blood sugar because #1 Diabetes runs in BOTH sides of my family and #2 I eat a lot of sugar.

But, turns out, they called me and said that I need to start eating more balanced meals because my blood sugar is too LOW. Isn’t that amazing? Crazy.

I have only gained around 2 pounds so far. You can’t really tell though. In fact, I really haven’t ‘popped’ at all. They say you start to show sooner during your second pregnancy but I haven’t found that to be true. I’m around the same size and possibly smaller than I was the first go -around.

this weekend, I’m going to keep being active. don’t know if I will make it the gym because I find it incredibly boring unless I’m taking a class..and since I’m going to have a late night tonight, I don’t think I will muster the motivation to make it tomorrow morning for my kickboxing class.

I do try to be a role model! 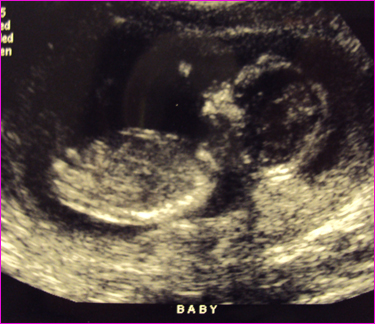 This is my 14 week ultrasound!