Mommy Fitness Blog: should I compete?

I am so tired. My sons keep me so incredibly busy. My youngest is so big – and he loves to be carried ALL the time. While I have a lot of work that I do, let’s not get confused people…I am with them 85% of the day unless I sneak out to train for an hour or run errands. I’ve been doing a lot of training at home since it’s most convenient, especially when I have no baby sitter or if I am unmotivated to leave the house. I’ve been spinning a lot with the bike my husband bought me for Christmas. It’s awesome since I just watch TV or most of the time the kids (they are so entertaining!) and I sweat I ton. When it’s a nice day (like yesterday and today) I really make it a point to get them out at the park so they can get some fresh air, be around other kids and expel a lot of energy. Since we’ve been home they’ve been on a pretty good schedule so at least I can look forward to a break in the day while they are napping – but sometimes what wakes when the other begins to nap!

Both are napping right now though (Thank God!) because today was an incredibly hard day. I woke up early, trained…went to my program..came home..woke the boys up…fed them…brought them to the park…fed them lunch…spent an hour trying to appease the crying of the youngest…then the second…then fell asleep for an hour…then I woke up VERY sore and tired…now I’m working…and I think I only have a good thirty minutes left of quiet time before someone wakes up.

So – I decided that I really need to focus. Sure I’m focused – and sure I have a decent body…but I want to be EXTREMELY focused and have a rock hard (yet curvaceous) physique.

It’s tough because my husband and I go back and forth on having another baby (maybe sooner than later)…and we are not planning it or preventing it so you never know! I am looking at some contests in June so it is amping me up a bit.

So for the fun of it I bought some competitive bikinis and a contest DVD to watch while spinning. (this is almost very routine of me since I ALWAYS watch contests when performing cardio when I competed in the past)

I have found that my eating really could be better. For example, I should eat earlier since I train on an empty stomach I don’t get to eat until I get home almost 1.5 hours after I finish training. (It’s best to eat within the hour) Then, I was starving today because the kids kept me so busy that I ended up eating a small portion of spaghetti (I ate mostly the turkey meat I cooked and a bit of angel hair pasta)…but then I had a handful of Honey Bunches of Oats cereal, then a piece of dried Baklava (which we brought home from Turkey) – and then so on since I was famished!! My calories all end up adding up perfectly at the end of the day but I really want to have some quality meals.  I want PERFECT meals five times a day. But that’s hard sometimes – especially with kids, but next week, I’m going to start planning better and making it happen.

My workouts are good – I only get a chance to perform 20 mins of cardio in the morning and usually I sprint and perform HITT. However, I don’t perform cardio for more than 30 mins so I really want to try to up that in weeks to come.

I’m getting my period this week though so I am feel the nausea, the sugar and salt cravings and the moodiness.  But I am going to start getting focused again so that I can be in fighting shape come June!

Here’s a shot of me on the cruise ship! 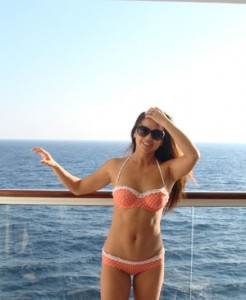