As I type this my little baby has just finished breast feeding and is sleeping peacefully on my lap. It’s been exactly ONE WEEK since I gave birth and I cannot believe he is out!

Last Thursday I began feeling small contractions around seven minutes apart around noon time. However, it wasn’t painful so I didn’t think too much of them. I even went to the hospital for a ‘stress test’ (since I was overdue) and they checked me – and found NO dilation. However, as the day progressed, the contrations never let up. It was bearable though. I ran a bunch of errands and met up with my friend Brian, who was in town to visit me from Washington. We went to Target and I started having more painful contrations every five minutes. It was so funny because here I was talking and laughing, then stopping and panting every five minutes. He was so nervous! But, for some reason I didn’t freak out or feel the need to call my doctor. I just wanted to keep going until it was ready to literally GO!

So we picked up pizza and I had a few bites – but as soon as Brian left around 9pm, I decided to take a bath with Christian…and that’s when contractions started getting closer. After washing Christian and myself, I started feeling continuous, painful contractions ever 2-3 minutes. While I was in the bath, David had already prepared all the stuff in the car and was waiting for me to put on clothes so we can go…

Then we dropped Christian to my mother’s and headed straight to the hospital. As soon as we arrived I found it almost unbearable to walk and someone offered me their wheelchair. I was actually wheeled into the maternity admissions! They brought to triage where they found I had already dilated 4cm. I was admitted at 11pm and brought to my labor room around 11:40. As soon as I arrived to the room they gave me my blood clotting medications and told me I couldn’t receive an epidural for at least half an hour afterwards. But at that point my pain was so hard and continuous I could literally feel the baby descending and urging to come out. Only around ten minutes after arrivin to my room I said, “Doctor Taylor I feel like I need to push!” She quickly examined me and said, “You’re nine cenimeters. Everyone get into place, Maria, I will need you to start pushing now.”

I was in shock. The first thing I thought was: I don’t have any pain medication in me.

The second thing I thought was: You have to be kidding me.

But they raised my legs and there I was…with no medication…feeling like I had to take the biggest #2 of my life. I literally pushed maybe three times….and he was out!

The whole experience was surreal. I couldn’t believe he was out. My mother was on her way and didn’t even make it to the labor! I thought I was in the clear for any issues as they kept dosing me up with my blood clotting medication. However, once they took the IV out the day before I was supposed to be discharged I started feeling really sick.  I was dizzy, felt like I couldn’t breathe and was extremely nauseus. I could hardly remember anything as my head felt clouded by vertigo. They admitted me into the ICU as my electrolytes had dipped to dangerously low numbers. My sodium was at 118! (normal is around 140) I was so miserable. I felt literally paralyzed and couldn’t move. When I did move, my body would cramp up and give three charlie horses all around. It was terrible.

Slowly they brought my electrolytes up and I was held there until Monday when I was discharged.

Now, I’m doing awesome. I was actually up and working by Tuesday. (Bad I know!) In fact, I’ll be honest when I admit I had a mini-breakdown yesterday from not taking it easy and having all these post-labor hormones running through me. I feel like I’ve been running a marathon with a pregnant belly for ten months and just had a baby drop out of me and I kept on running. It wasn’t until someone told me to take it easy because her uterus ‘fell out’ after she didn’t take it easy after her second child. That image will definitely  halt your life!

Now, I am doing fabulous. I still work but not stressing out too much. David’s mother is here from Mississippi and she’s been a great help, especially with Christian. (who by the way, adores his little brother!) My tummy has went down A LOT. I’m actually shocked. It’s gotten down lower than my first go-around with Christian. People are shocked when I tell them I gave birth a week ago. I’ll post pictures after I take some later.

I don’t plan on working out for at least a month. I’ll also try cleaning up my diet sometime soon – not right now though! I’m breastfeeding so I need to make sure I’m taking in enough calories. I love this article. Alissa Carpio, a fellow writer and new mom wrote about breastfeeding and weight loss. 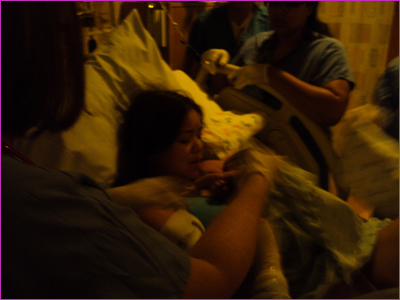 Action shot! Right after coming out of me the nurses brought Christian to me. 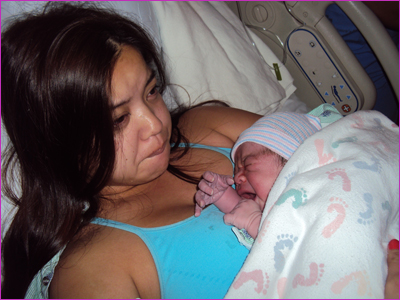 Bringing a child into this world is the most painful experience in the world!
But, it’s the most rewarding!