I’ve been waking up at 5:00am consistently this week because I started a fitness program at a local middle school that begins at 7:00am. Since I would be up, I decided to try to get to the gym before the program since it will get me up and going early and also give me a time schedule to abide to…so far it’s been great. I love being up early, I love going to sleep early, I love being efficient for the rest of the day knowing I exercised…but MOST of all, I love putting exercise and numero uno on my priority list.

My satisfaction this week is in part due to my dissatisfaction last week. It seemed I was soo busy that by the time 6:00pm came around…I was too exhausted to go to the gym. ALSO, even though I haven’t gained any weight, I ‘feel’ fat. My belly isn’t as hard (meaning muscles) and I didn’t like being around too many people.

SO – last week I only trained about a couple times in addition to my mom-me fitness group workouts. I utilized my treadmill at home while the baby was playing beside me in the garage. That was fun! He was staring me probably wondering, “why is mommy running but not going anywhere?”

My diet has been so so too…this week has been much better, but to be honest, I don’t eat as ‘perfect’ as I used to since pregnancy makes me less strict on my diet. I have a protein shake every morning with either oatmeal or cereal, I try to have a turkey sandwich for lunch, a few snacks full of nuts or fruit and some type of dinner that isn’t too heavy…however, dinner’s are no longer chicken and rice. It’s more like half a chicken burrito. (on a wheat tortilla of course!)

The baby IS officially teething. Since he began drueling at 5 months, we thought it would come sooner, but he’d druel to no avail…now, he is sprouting two bottom teeths and he is NOT a happy camper most of the time. Luckily, he started sleeping better…and luckily my other half gets up more at night since he knows I wake up hours before him!

I had a prenatal appointment yesterday and it was awesome. We heard the baby’s heart beat and the doctor could actually feel my uterus even though it was still early in the pregnancy. To be honest, it felt good when she said, “since your thin you can feel the small baby bump.” Of course, I don’t like the word THIN, I prefer the word LEAN. She also said “I’m surprised you want to do this all over again, considering last time you almost died.” LOL.

I told her I originally wanted seven kids. (she has seven kids) She said this labor should be better since it’s close to my last labor…so we’re crossing fingers. She also said that I recovered so well and my weight loss was so progressive that having more kids would be awesome if my body could hold up as it has.

Anyways – the pregnancy is going well. No weight gain. No other bad pregnancy symptoms.

This week is half way over – but I’m telling y’all right now, my goal is to wake up every morning at 5am to train…all days cardio and 4 days with resistance training. I’m not doing intense workouts and my heart rate doesn’t get too high (for those of you who are scared to train while pregnant) 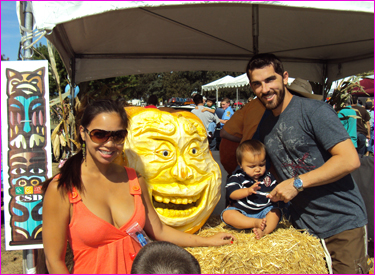 at the Pumpkin patch with my family.