Mommy Fitness Blog: ‘are you going to compete soon?’

When you hear that question, you KNOW you’re close to your fitness goals! I am actually 3 pounds now away from my original goal of 125lbs after giving birth, which is approximately two pounds away from my last competitive weight. I DO have to say though, that the weight is carried a bit differently now. My hips are slightly bigger – maybe an inch, so it makes working my glutes a bit harder as I’m training them twice a week to achieve that roundness again. (It’s still round but it could definitely be ROUNDER) Now that I’m reaching 30 soon I can see that my muscles have definitely matured after over ten years of consistent weight training. When I say ‘consistent’, I mean every week for the last ten years, excluding the six weeks after I gave birth, I’ve trained my body. It’s rare when I go over two days without doing SOMETHING in the form of movement.

For example, this past week, on Tuesday and Wednesday, I was unable to train due to lack of sleep (the babies were sick) and work stuff throughout the day. It was SO annoying. Especially since I have my fitness goals each week, which includes 10 total miles ran, two glute training days, work every body part and work abs. SO, even though I didn’t train those two days, I can still complete my goals. This morning I woke up at 5am and ran four miles and performed back and abs. Tomorrow and Saturday I plan on running three miles each, which will complete my 10 mile goal. Last week I ran 5 miles in one session just so I can say I completed my running goal! In fact, last week I did awesome except I didn’t train glutes twice. It seems that every Saturday for the past two months have been inconvenient for me to train. While I won’t be able to get to my Saturday kickboxing class this weekend either, I do plan on getting up at 5am to train! OMG. 5am! …on a Saturday! That’s dedication.

This past weekend I attended my sister’s baby shower and people were in SHOCK at my weight loss. Some haven’t seen me since I was pregnant, other’s last saw me during Nicholas’ Baptism in July. Some thought I was sick (and asked if I was suffering from Bulimia again..NO) and some asked, “what do I do?” Which is the biggest question any person who loses a lot of weight gets.

The funny part is – is that they are hoping to hear that I’m taking a magic pill or eating a special food.

They don’t like hearing that I wake up every morning at 5am, or that I run (especially bleachers). They don’t want to hear that I eat small meals throughout the day, drink protein shakes and stop eating past 7pm (or to be truthful maybe early 8pm 😉

In fact, after talking to them, I usually find them gobbling down some dessert or drinking alcohol.

My body is starting to feel more flexible and lighter. And it feels great! I’m starting to need more motivation to train because I’m so close to my goal that it’s making me a little complacent. My goal tomorrow is to train glutes, run 3 miles, and then train again at the Bleachers. Hopefully the weather is good!

This weekend I have a Halloween party that I am hosting – I’m going to try my best to not overindulge with the sweets! Then I have my Bachelorette party next Friday and Bridal Shower on Sunday, so I REALLY have to watch my diet!!

My sister is 8 months preggers in the shot below! This was taken at her shower this past weekend. 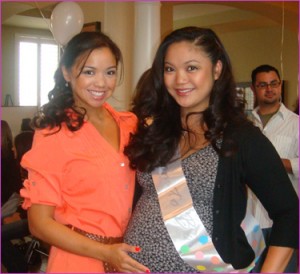