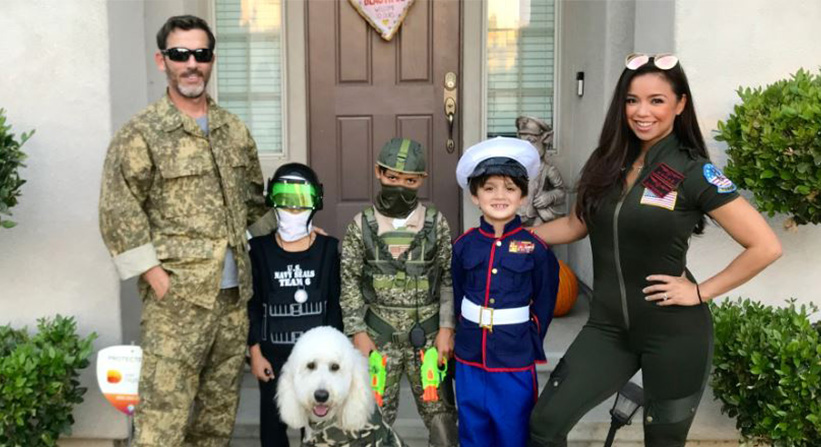 I often tell the story of how I met my husband on MySpace – when in reflection, I know I “met” him when he decided to join the Marines in 1996.

While he grew up in Hawaii, he unsurprisingly chose to go to boot camp at Parris island, the same place his father went as he is a man of traditions. He joined the infantry like his father – he was a grunt, so I was a grunt, he would say – but chose a security force option to peruse first.

During the Marines he was selected to be part of FAST Company, a special unit dedicated to fleet anti-terrorism security. He was trained in anti-counter terrorism attacks, close quarter battles, maritime interdiction operations, surgical entries and every weapon system.  After three years in service, he re-enlisted for 4 more years,  received the Navy Achievement Medal in Ops and won Marine of the Quarter at both the battalion and base levels.

After leaving the Marine Corp he worked as a deputy, then a lead trainer/supervisor for a Security company. Ever hard-working and driven, he’d work 80hr weeks and sometimes chose to sleep in his car instead of undergoing a 2-hr round trip commute. Seeking more opportunity for his family, he was hired as a private security contractor in Iraq, given only one week to prepare a passport before immediate deployment.

As the story has been often told, David was on a routine mission when a suicide bomber drove his explosive-filled vehicle into the convoy in front of him. Metal shrapnel would pierce his skull, leaving with him a traumatic brain injury for life. In the year that followed, he would endure six brain surgeries, relearn how to walk/talk again  and finalize a divorce from his tumultuous 7yr marriage to his first wife.

Unbeknownst to him – and me – while his world was collapsing, I was praying in California. I was 25 and anxious to start a new journey with a long-term partner. Instead of wishing for a husband, I began confidently praying incessantly for him. Each night I would say,

“Dear God, please bless my future husband. Keep him safe, give him courage and strength. Help him find his way to me because I would like to be with him now! Whatever your will is, please give me patience and faith.”

When we met on MySpace, I just founded my nonprofit, Fitness without Borders, and decided to network with other people. I felt defeated but optimistic after having just left my corporate job for the same reasons he left the Marine Corps – a disappointment in leadership.

While on a nonprofit page I happened upon a comment from a man with a shaven head, looking artistically up towards the sky. Intrigued, I clicked on his profile, went directly to his blogs and immediately resonated with the deep writings of this prolific writer.

I subscribed, but never sought this stranger out again. Two weeks later, he would find a new follower and we would begin a fantastical moment of connection and rebirth together.

I knew I loved him, but I was scared to love him, after all, he was an injured, divorced father in transition. I knew despite my fears, I was meeting this man – and he was meeting me – for just a moment in time. We both held past titles, awards and accolades,  but in that moment, we were none of those things. We didn’t have a job, we didn’t have an identity, we didn’t have a home or a lot of money…

All we had was love and a lot of dreams.

We ‘met’ when he joined the Marines. I say this today because if it wasn’t for his desire to do more and BE more, I wouldn’t have resonated with his zealous energy.  I’ve unconsciously been drawn to men in the military, which I attribute to my father, a hard working immigrant and San Francisco police officer who led in traditional, sacrificial and heroic-like ways.

We chose “God Bless the Broken Road” by Rascal Flatts when we married in 2010. It was a hard day as my mother wasn’t present due to health issues. For years, I quietly resented David for not addressing my pain and having a split experience of our wedding day.  Ten years later we recounted the difficult memory and, in our tears, he said, “I knew you were hurt, but I was trying to be strong for you.”

He was strong…a quiet resilience that my natural assertiveness is still learning.

That’s the presence I prayed for and that’s the man who lived, fought, nearly died and chose to hold my hand in the end. It was a broken road, but it was also a powerful path that began with a choice to serve.