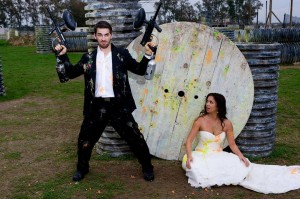 Since I introduced my husband (poorly) in my last post, I thought I introduce him or ‘us’ one more time to save me from looking like an unappreciative wife who doesn’t get the sincerity behind my husband’s actions. You will see him time-to-time since he is a man’s man who enjoys shooting, paintball, computer games, obnoxious jokes, political banter and a good movie. At the same time, he’s also a girl’s guy in that he likes listening, providing insight and writing.

In a far away land called MySpace, I discovered his blogs when I was clicking around trying to network with people in the nonprofit field. I didn’t browse his photos or check his relationship status. I simply subscribed to his writings because they were profound, deep and incredibly spiritual. At the time, I didn’t know that his depth stemmed from life experiences as a Marine for nine years, as a divorced man with children and a private security contractor who survived a car bomb.  A couple weeks after I subscribed, I discovered several comments from a handsome stranger on my online writings. I had forgotten who he was, but in time we realized that we shared many foundational values about life, love, family and happiness.

We are similar in that we don’t equate money to happiness. We don’t spend recklessly. We work hard. We travel. We live simply. We enjoy political and spiritual conversations. We love to dine.

However, while we have similar hobbies and values, those closest to us know we appear more opposite than alike.

David is funny, sarcastic, enjoys browsing YouTube videos and watching comedies.  He will research anything and become an ‘expert’ in that topic. He’s like a little farmer in that he enjoys his tiny fruit trees and the single rose that blooms from the faintest bush. Right now he is obsessed with bees and is setting up an area to raise them in the backyard. There are certainly a lot of things to love about him. He’s affectionate, he’s not bad on the eyes, he knows how to work a colicky baby and he will let me go across the country for a few days if I asked for it.

I’m a different breed than him. I rarely watch TV. I don’t get jokes easily. I work on ‘save the world’ projects often. I get bored and need to learn something new often. I constantly need change or challenge – and I love that he knows this about me.  I’m the butt of his jokes most of the time, and close onlookers think our relationship is more funny than firm. In past relationships I dated men who were similar to me: who focused on physical training and professional success. Those didn’t work out (obviously) and so when I chose David to marry, I knew it would be challenging because we were so “opposite”.

Throughout our years together I sometimes continued to wonder if being opposite or being alike was easier or better? Sometimes I feel like life would function more efficiently if we were both on the same page motivating one another as we walk in the same direction. Other times I realize that while it seems like we are on separate paths because we think differently, the truth is we see more of life because our insights provide different lighting.

I’m never one to make my life appear like roses and candy. In fact, I probably roll my eyes a few times at people’s posts that make their marriage seem like their constantly in love with their ‘best friend’, ‘soul mate’ and ‘perfect husband’. I know how a perfect picture looks like, I think me and David take some pretty good pictures together.

However, in the last few years, it feels like a tornado has swept through our lives. Every day is filled with endless cleaning, crying and cooking. While we divide responsibilities, sometimes it feels a little imbalanced. I yearn for more time by myself. I wish he would plan more romantic outings together. I know that these first few years while the boys are still young is a sacrifice for both of us.

I don’t care how in love a couple appears in their first few years of dating, when you add children and responsibilities to the mix, life changes – you change – and your relationship ultimately changes also.

David and I have become stronger because of our children. We are trying to take breath in the form of blogs in between the battlefield of our daily lives and you’re witnessing it! If there’s anything I hope you gain in seeing our interaction as husband and wife is a chuckle…

Because really, there is a lot of laughter in our house. 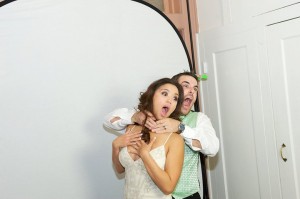 This was a fun shot taken for a flipbook at our wedding. 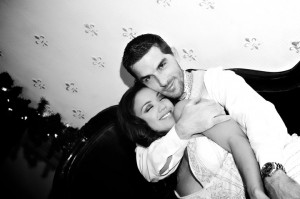