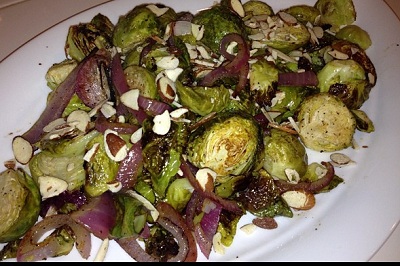 I love brussel sprouts. My ‘go to’ vegetables are usually brussel sprouts, broccoli or asparagus. While driving home from the gym today I started salivating thinking of the bag of fresh brussel sprouts in my fridge. As soon as I got home I soaked them in water (to clean it), then cut off the stem and halved them. Next I sliced thick pieces of red onion and added it to the bowl of brussel sprouts. Together I mixed a tablespoon of olive oil, balsamic vinegar and topped with some salt and pepper. I placed it in a 425 degree oven for 20 minutes and wallah! Yum, Yum give  me some! I added some sliced almonds on top and it was dee-lish!

Here are the  Health Benefits of Brussel Sprouts:

Cholesterol
The high fiber content (over 15% of our RDA) of Brussels sprouts lowers our cholesterol by binding with bile acids that the liver produces from cholesterol for digesting fat. Because many of these bile acids are coupled with fiber, the liver is charged with producing more bile acid to digest fat, and therefore requires more cholesterol to do so, ultimately lowering the cholesterol amount within our bodies.

DNA
Recent studies have shown that certain compounds in Brussels sprouts block the activity of sulphotransferase enzymes that can be detrimental to the health and stability of DNA within white blood cells.

Antioxidants
A host of antioxidant ingredients are found in Brussels sprouts, including Vitamins C, E, and A, as well as the mineral manganese. Furthermore, flavonoid antioxidants like isorhamnetin, quercitin, and kaempferol also serve well to protect against oxidative stress on the body’s cells.

Inflammation
Glucobrassicin, a glucosinolate particularly abundant in Brussels sprouts, has been shown to fight inflammation on a genetic level once converted into the molecule indole-3-carbinol, or ITC. Furthermore, one and a half cups of Brussels sprouts contain about 430 milligrams of omega-3 fatty acids (about ⅓ of the daily recommended amount) that are an essential part of our body’s anti-inflammatory messaging molecules. Finally, the wealth of vitamin K found in Brussels sprouts has been shown to effectively regulate our body’s inflammatory responses.

Cancer Prevention
Glucosinolates in Brussels sprouts and their detox-activating isothiocyanates are shown to fight against and even prevent various cancers, including bladder, breast, colon, lung, prostate, and ovarian cancer.

Cardiovascular Support
Brussels sprouts contain the isothiocyanate sulforaphane made from glucosinolates. This powerful compounds not only triggers anti-inflammatory activity in our cardiovascular system but may also prevent and even possibly help reverse blood vessel damage. By regulating inflammation within the body, Brussels sprouts can fight against the onset of heart attacks, ischemic heart disease, and arteriosclerosis. Furthermore, the lowered cholesterol mentioned earlier may also lessen the possibility of arterial blockage.

Digestion and Diet
One cup of Brussels sprouts contains four grams (16% of the RDA) of dietary fiber, which can aid in digestion, prevent constipation, maintain low blood sugar and check overeating. The sulforaphane found in Brussels spouts also protects our stomach lining by obstructing the overgrowth of Helicobacter pylori, a bacteria that can lead to gastric cancer.

Vitamin K
Brussels sprouts are especially high in vitamin K (one cup contains 273.5% of the RDA), which promotes healthy bones, prevents calcification of the body’s tissues, serves as an antioxidant and anti-inflammatory agent, and is essential for proper brain and nerve function.

Vitamin C
The nutritional benefits of vitamin C (one cup contains over 161% of the RDA) found in Brussels sprouts ensure a healthy immune system, ward against hyper tension, lower blood pressure, fight lead toxicity, combat cataracts, and serve as a powerful antioxidant that prevents “cellular rust,” which can lead to atherosclerosis, heart disease, stroke and cancer.

Vitamin A Brussels sprouts also contains over 20% of the RDA of vitamin A that boosts immunity, protects eyes against cataracts and macular degeneration, maintains healthy bones and teeth, prevents urinary stones, and is essential to our reproductive organs. Folate A biochemical event called the methylation cycle relies on folate to properly transcribe DNA, transform norepinephrine into adrenalin, as well as transform serotonin into melatonin. Furthermore, folate suppresses the amino acid homocysteine that has been shown to contribute to heart disease. One cup of Brussels sprouts contains a healthy dose of folate (almost 25% of the RDA) and the health benefits associated with it.