The Darkest night of my soul.

This past weekend David and I watched a National Product show, attended the Fit Expo, dined with friends, biked at the beach, recorded a podcast and visited a Brain Rehab center. It was an eventful weekend filled with speeding through traffic, networking with industry friends, changing in the car, trying to fit 4 things into one hour and deep sleeping every night.

I feel so blessed that David was there: keeping my anxiety in check, making sure I got my morning workout, and assuring I was on time for meetings.  His company is a whole new world for me, for usually I attend conventions, dine with friends and drive to L.A. by myself.

As we were riding home yesterday night, David asked me what the scariest moment of my life was and while I’ve sky dived, traveled internationally by myself and stepped on stage in a bikini NOTHING could compete with the night in early 2005 when I had an extreme anxiety attack. It was a wet, cold night similar to the weather I am experiencing right now in Sacramento – I had just underwent 2  Bulimic episodes in my parents home and knew I needed to leave that negative environment and drive to my place in San Francisco. For the life of me, I couldn’t fathom being in the car by myself for 1.5 hours
and was engulfed with feelings of fear. I was scared of life.

But most of all – I was scared of myself.

All of a sudden, childhood memories of praying for eternal life, crying in a small closet and drinking pretend holy water came back to me. I recalled not feeling secure and desiring to find a place that protected me from the mental and primordial fear that we were all in essence….nothing.

Philosophical questions coupled with my life transitions stirred up a perfect blend of anxiety that fateful night. I drove to my college boyfriend’s home hoping his presence (even though we were split) would console me but as I sat outside, I knew it wouldn’t.

I knew nothing would.

That was the scariest moment of my life

The moment when who you were then, meets who you are now, and you realize, that neither are real…

The moment when you have nowhere to run, nowhere to go and nowhere to be – because all that you need to do, have to do, want to do and will do – is an illusion of a life that will soon pass.

I forgot how that night ended almost like I forget how each day of my life begins.

These days  I rarely get depressed, I hardly get life anxiety and I rarely fear the unexpected. I probably try to squeeze too much tasks in one day, attempt too hard to make continuous progression and have too much ambition to keep me busy for the next 30 years.  Each day I take calculated actions and monitor every dream that passes through my psyche, for eventually each thought will take form.

And while that single night no longer has form..

…that night still lingers in my soul and while it doesn’t reveal itself on a day to day basis. It still sits there and makes friends with other souls who know how it feels to fear the unknown, desire the unreachable and trust the unseen. 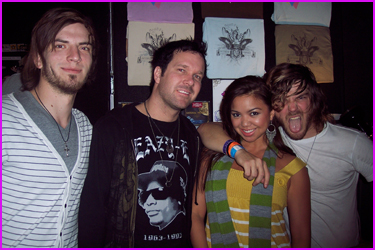 We came in Friday night to watch Daniel perform.
David’s younger brother is the lead singer of an awesome alternative rock band
called “National Product”. I looovvee their music.
Check one of their music video, “Sean Song”
here. 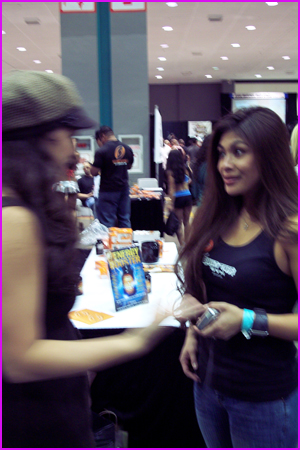 With my great girlfriend Mona Liza Reyes!
Check out our fun podcast here. 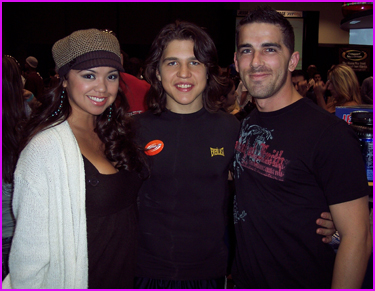 With ‘Little Hercules’ all grown up – 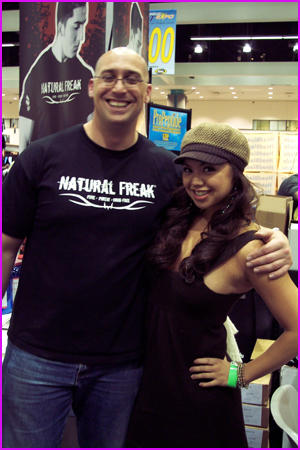 With my good friend, “Big Jonathon” 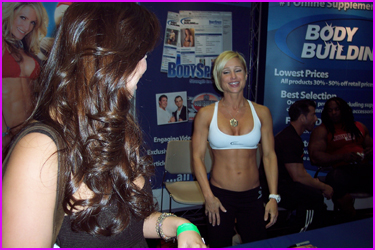 Jamie Eason was looking awesome! She’s such a sweet person. 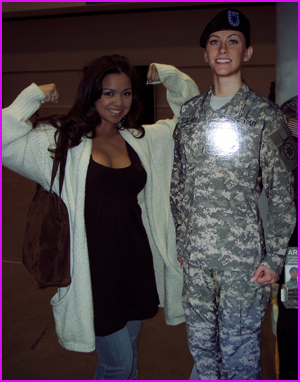 This is actually my first picture with a cardboard person! 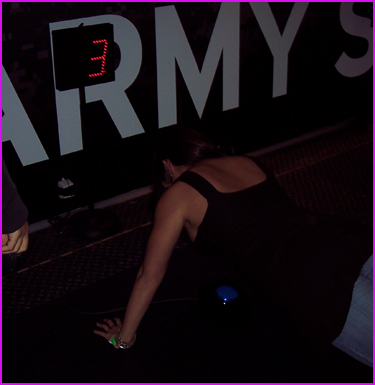 Doing the pushup challenge at the Army booth! 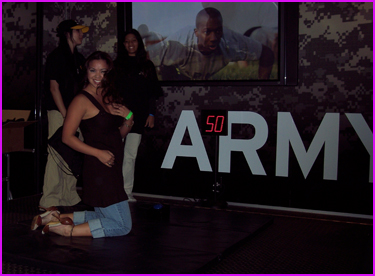 50 was easy! I used to win all my pushup contests against guys! 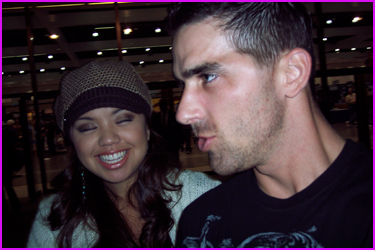 We always have a good time together –
except the times when he wants to throw me out of the car when we’re having arguments~ LOL! 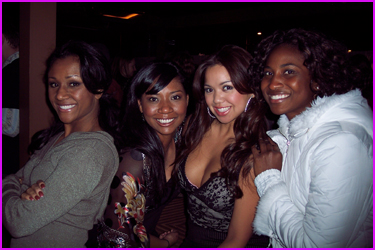 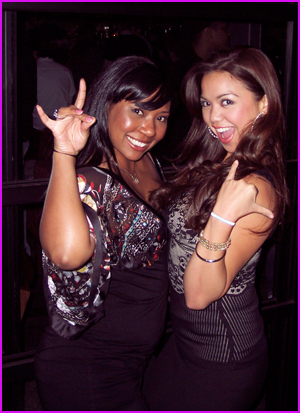 This woman is such a hoot! She had 5 glasses of Red and I had 3 glasses of White that night. 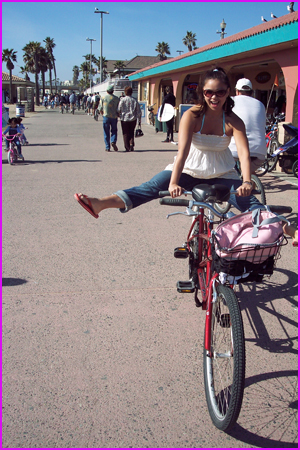 On a Tandem bike getting ready to ride with David on Sunday afternoon. 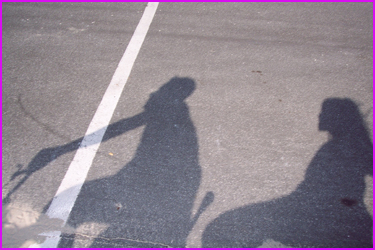 I took this shot! Isn’t this awesome!!! I LOVE IT! 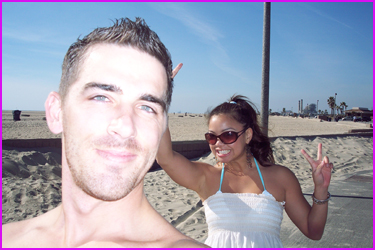 His eyes match the background! 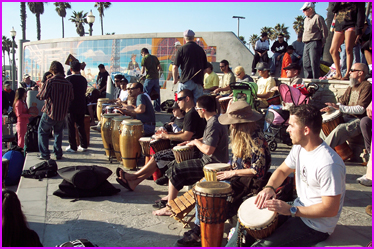 We lounged afterwards and listened to music. David started playing the Bongo’s,
while I was……. 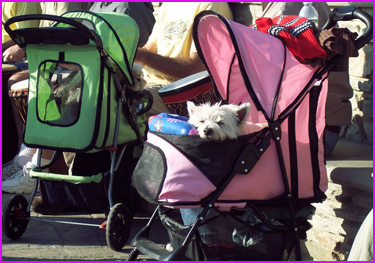 ….staring at this really cute dog!!!! I just wanted to cradle him in my arms!! 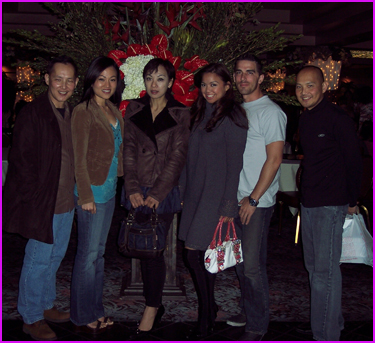 Sunday night with the editor and publisher of 13 minutes magazine: Mai and Quinn! 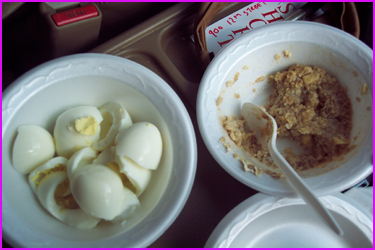 Breakfast Monday morning – on the go!
(I had to cleanse after this whole weekend!) 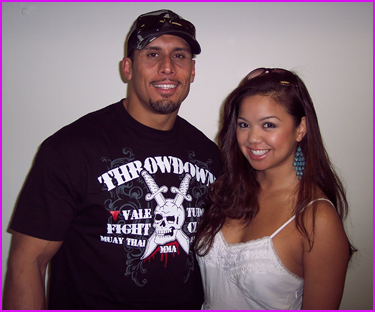 I recorded a new podcast with Tanoai Reed, “Toa”, on American Gladiators.
He is sooo down to earth, REAL, and absolutley motivational. 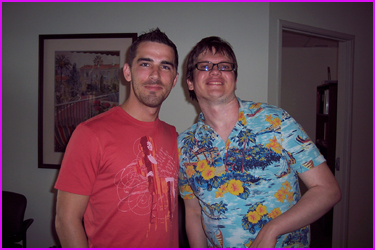 We visited Casa Colina’s Rehab center, where David spent 2 months recovering from his last
Cranioplasty surgery in February 2007.
He was injured during a Car Bomb in Iraq almost 3 years ago when he worked in Private Security. 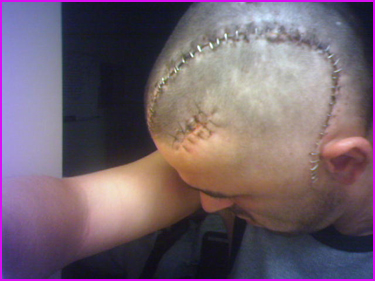 He only had a 5% chance of living. In his initial recovery, he had to learn how
to walk and talk all over again – after undergoing life changing experiences, he began writing…
and that’s when I fell in love with his words, his deep insights,
his wisdom and his heart and will to live. He is a blessing to me and this world.

David is a living testimony of a life warrior.