The Gift of Belief

Two months ago, a couple of my employees called in sick for health related reasons.  That week, I held a mandatory meeting to introduce a program in which they were to follow 8 simple rules for the next 12 weeks.

Every week I weighed them, discussed their diet, introduced a new exercise and provide motivation for the next week. In a short period of time I watched as they lost inches off their waist and pounds off the scale. Most importantly, their self confidence, fitness level and lifespan have increased. Instead of sleeping, watching TV or eating during their breaks, I have witnessed them exercise indoors or run outside. Instead of consuming rice, a food staple they feared they couldn’t live without, they have now opted for vegetables and complex carbohydrates.  In my years working with them, I’ve never seen them more proud, energetic and happier than I do today. They have thanked me with sincere gratitude for giving them the ‘gift of health’; for it doesn’t matter what you own in this world, you can never buy good health. However, as I reflect on their transformations more today, I know that it wasn’t health I gave them, it was confidence in themselves….

When working with them initially I knew there would be a mental struggle to overcome. I knew (like most) they would mentally ‘fail’ themselves before even beginning, due to past weight loss disappointments. As in anything in life, the first thing you need to have is a Belief in Yourself. You need to believe you can achieve something….believe that you can become something.  It’s tough when you are bounded by past let downs, negative people or a destructive environment. In addition to mental fears of the past and present, it is also fear of the future – the unknown – that stalls people.

That’s why I took the reign.

Sometimes in life – you need someone who believes in you. Someone who can give you enough of their strength, to carry you through this tough time right now…not forever, but just for right now.

My sixth grade teacher, Mr. Gleaves, mentored me when I first began shining as a public speaker and writer. That year I became President of my Elementary school, winner of Oral Language Fairs and a published writer in my county.

My first pageant director, Noel Rominque, discovered me at 16 when I was a shy, un-polished teenager volunteering as a performer for a Filipino theater. He counseled me when I competed in Canada and Texas at age 17, to when I competed in the Philippines at age 22.

My fitness manager, Jesus Sandavol, coached me when I first became a personal trainer in college. He always told me I was like a diamond that needed pressure in order to shine. In my earliest experiences as a trainer with him, I learned how to efficiently train, successfully sell fitness packages and develop my zeal for fitness.

The common denominator amongst my life mentors was their passion in their field and belief in my abilities. It was so natural for them to acknowledge my gifts and invest enough of their strength until I finally started believing in myself. As I coach people today – in my business or my mom-me fitness club – like my mentors, it’s so natural for me to lead, advise and educate because I am so passionate about fitness. I’ve been through the motions, I know the blueprint and I can see people’s physical gifts. I also intuitively know that in order to gain in life, you must continue giving what you were gifted.

Sure I’m a confident person – but I wasn’t born this way. I know this truth personally as a mother watching her son as he climbs up a rock at the park. He will climb, but he will want to hear my encouraging voice and see me below in case he falls. The gift of believing in someone reaps a million miles of success. Not only do you plant that tiny seed of belief, but through nurturing and attention, that seed will grow so that person can one day believe in oneself. 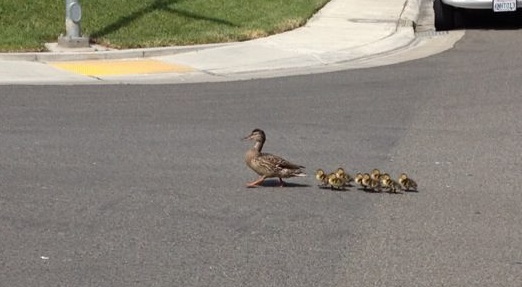 I found a momma duck and her ducklings outside my house the other day! It was so awesome.