I slept in until 10:30am today. In fact, this entire day I didn’t go out, remove my pajamas or check my emails or voicemails. It was a day lazily filled with reading Brenda Warner’s “One Call Away”, playing with the boys and lounging around my bedroom. Today was a far cry from the busy life I had assumed for the past few months. Last night was my breaking point: there I was, having painful but irregular contractions, while trying to get the boys ready for their fourth Christmas party in a week. We stayed out late last night after an evening filled with games, caroling, gifts and food.

Earlier yesterday my doctor was concerned that I had become too sick to schedule a potential induction (due to my high risk pregnancy) later this week. I woke up this morning tired, congested, sick and ready to spend an entire day not driving, not exercising, not working…but most of all, not feeling committed to a person, place or thing.

It is now nearly midnight and the baby is moving forcefully inside my womb. He becomes very active at this time every night, ever since I began feeling him around five months ago. I am going to miss this type of closeness, for there is absolutely no feeling like creating a human being and watching it develop month after month in your body.

Very shortly our third son will be joining our first two in horseplay, wrestling, drawing and playing. Of course, that won’t be for nearly a year – but it’s still exciting to watch Christian and Nicholas knowing that there will be an additional boy adding mischief and madness to the mix.

Recently David and I have been discussing the importance of being a positive role model for our children. While I admittedly needed a break today, I wouldn’t allow my kids watch me in a bathrobe, lying in a bed while eating cereal every day.

I want them to grow up to become great men.

I want them to marry a woman who is beautiful, smart, ambitious, faithful and loyal. I want them to be the brave, strong-willed and intelligent man I know their father to be. I want them to have certain life expectations because we created a life filled with giving, learning, traveling and praying. Children are influenced by the people who surround them in their childhood – for David, he often talks of how his father was a great model who influenced him to be a U.S. Marine and good father, especially in divorced circumstances. For myself, both my parents provided an amazing example.

The other night I was shopping with my mother because she had “adopted a family” for Christmas. In addition to the clothes we already bought for the poor elderly, my mother also committed herself to this further cause. This was not unlike her as she throws generous parties and purchases nice gifts for the care home and the caregivers every year. She has instilled in us the same charity and self-less philosophy.

There have been times in my life when I have confided my fears and anxieties about the future, finances and even family with my mother. In the end of our conversations my mother would always look at me with comforting eyes and say, “God always provides.”

There are many things I want to instill in my children, but the biggest lesson I want them to learn is what my mother has always reiterated to me….

That God always provides. If you put your faith in him – there is a plan he has for you, as long as you believe. 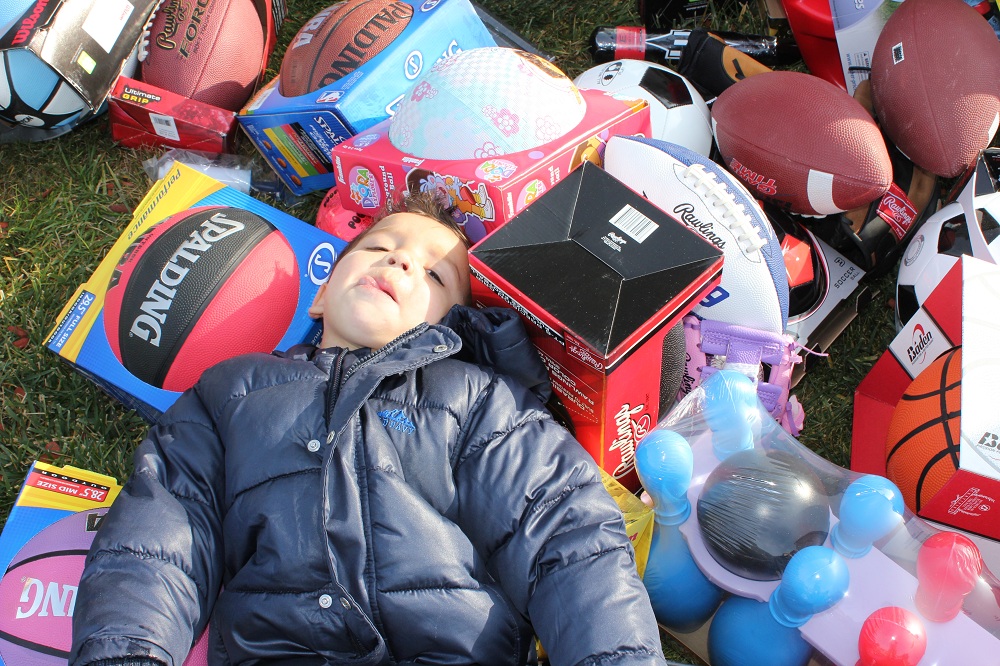 Christian enjoying the sports gifts we collected from our Christmas party before we donated them to local foster kids!