Everything that went wrong in 2014

From severe acne, weight gain, war zones and betrayal – how everything that went wrong, really went right in 2014.

Like most, I began this year with high hopes, a set timeline and a desire to hit resolutions. Despite ending the prior year at a low after being banned by Facebook for supposed hate speech, I was ready to take my newfound public platform and motivate others to stop making excuses. In January, I launched the No Excuse Mom Movement, which included our first annual Fit Mom Swimsuit Calendar and the organization of hundreds of free workout groups in 25 countries. In the process, I was featured in Oxygen magazine, the cover of Shape Malaysia, filmed ABC Nightline and Dr. Oz and appeared regularly on HLN and News10. Not only did I write and finish my first book, The No More Excuses Diet, but I also traveled to Hawaii for a family reunion, went on a pilgrimage to the Holy Land (Israel), and boarded my first family cruise to the Caribbean. From an outsider’s standpoint, it seemed like an incredible year! And it was.

But as I reflect on all the things that seemingly went right, in-between the headlines and Facebook posts, there are private stories of strife. Often times we see the highlight reel of a person’s life, not realizing that in order to see one’s strength, there was a prior struggle.

When I began my journey this year, I was in a lot of pain. After years devoted to hosting free fitness programs, mom groups and eBooks, I was internationally chastised as a famous fat-shamer who brought women’s liberalism back 50 years. While critics distressed me, they didn’t deter me – I still believed that if we empowered the leaders of our homes, we can change the health of our nation. So, I directed this tumultuous energy towards No Excuse Moms, and I taglined our movement, Health Starts at Home.

While bringing on NEM regional managers and hosting a new calendar contest, I was blessed with the opportunity to write a book with Penguin Random House. For someone who wrote her first book in 3rd grade, became a published poet in 6th grade and became a freelance writer in her twenties, this was a synchronized break to put on paper, what I know for sure, about fitness, nutrition and creating a solid program to build your best self.
Around the time I started writing The No More Excuses Diet, I began suffering from acne. For someone who rarely has pimples, especially during puberty, it was an aggravating experience. Every week, new pimples, formed on my forehead and would leave scars and additional flesh-colored comedones under my skin. While vanity played a small role, being a public face that appeared regularly on TV was not easy when dealing with severe acne. I remember one morning, months after the breakout began, and I couldn’t get out of bed. Up to that point, while I was incredibly insecure, I continued to work, do media, go the gym, attend events and be present at every sports practice, while hiding under hats, layers of foundation and investing in several topical acne solutions/medications. That particular morning I had to assess a new resident for my care home. My face was inflamed and my skin was brutally scarred.

I hit my low – and couldn’t keep a joyful attitude anymore. I was stressed from so much stress – and while I don’t show it on the outside, the stress was manifesting, in the form of acne, from the inside out.

I was fatigued from building the NEM organization, managing my care homes, cleaning the house, cooking daily meals, caring for my kids and writing my book at the end of each day. Not only was my face affected by internal stress, but my weight began to climb.

My clothes were tighter, my AB definition was disappearing, my bras were a bit snug and my fitness level was weaker. Lacking sleep, skipping meals and dealing with continuous injuries were taking its toll. Suddenly, I no longer felt like ‘Fit Mom’ and often felt fraudulent in trying to motivate others when I was also struggling to motivate myself.

When I finally completed the book, I rewarded this feat by journeying with my father on a pilgrimage to the Holy Land. We visited Galilee, Nazareth, Bethlehem and Jerusalem, where I prayed at Holy sites like the Church of the Holy Sepulcher, Mount Tabor, the Wedding Church in Cana, St. Peter’s House, the Garden of Gethsemane, the Western Wall, Dead Sea and Mount Calvary. While visiting the Mount of Beatitudes, we stopped on a hilltop overlooking the Syrian Border in Golan Heights. In disbelief, I could hear gunshots and see smoke from bombs in the city of Queneitra. According to CNN, the rebels recently seized the city days before after capturing UN Soldiers. I stood in horror, sadness, anger and humility.

I’ve often questioned life’s unfairness – after all, we don’t decide where we are born, who our parents are, what genetics we are given, or what experiences we will undergo. Life, on a large level is decided by fate, but, if you are blessed to have simple haves like water, shelter, food, family, faith and freedom, then live life to its fullest and give as much back as you possibly can.

Since then, I have woken up with gratitude every day because while there are so many with more, there are many more with less. Be prayerful about your perspective in life and know that life can be positive if you seek for it.

While I prayed for gratitude, it wasn’t an easy effort, especially when I discovered my Instagram page was hacked by a former NEM admin later this year. Despite being hurt by the betrayal of several past admins, I focused on the people who provided kind advice, called me out of concern and helped rebuild me when I felt completely broken. In my years of striving, I intuitively knew that there are reasons why people come in and out of your life. You will always deflect people who don’t resonate in your energy field and affect people who are.

So as I end 2014, while many things went ‘wrong’, they really were the right events to make me grow in strength, humility, passion, perseverance, love and forgiveness.  I am leaving with a few less untrustworthy people, plenty more passionate colleagues, a new understanding on stress, a greater gratitude for clear skin and a humble awareness that despite what I’m going through in life – I still get to live in a free country and utilize my free will to focus on what’s important: family, friends, faith and fitness. 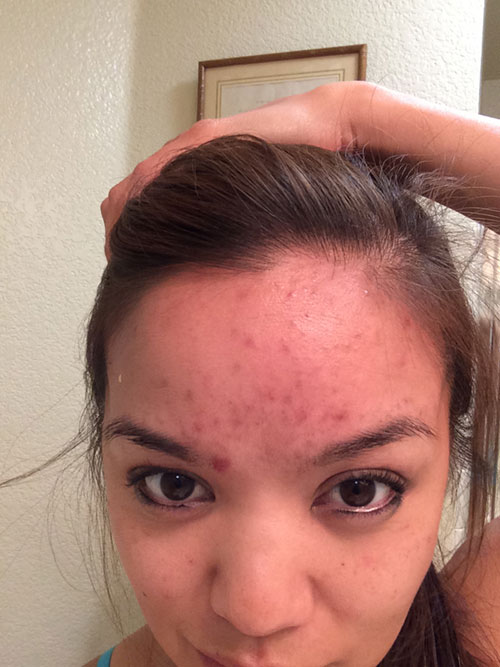 My hubby voted against sharing this image, but I’m sharing anyways! This is an example of the acne I was dealing with. This wasn’t the worst stage either! 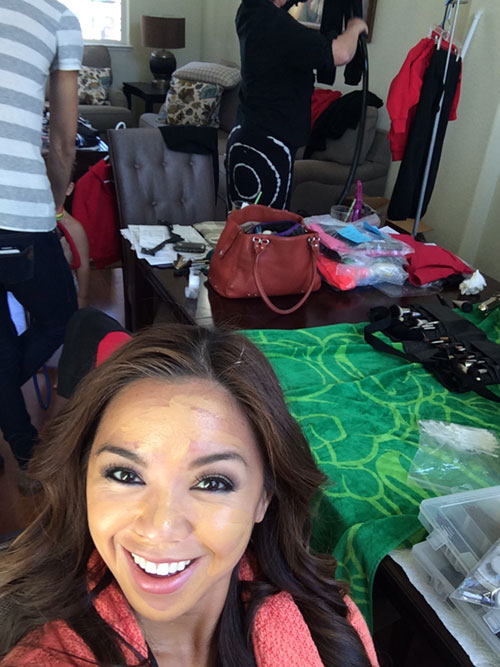 This is how we cover that up! Lots of foundation! I took this selfie during my People Magazine photoshoot. 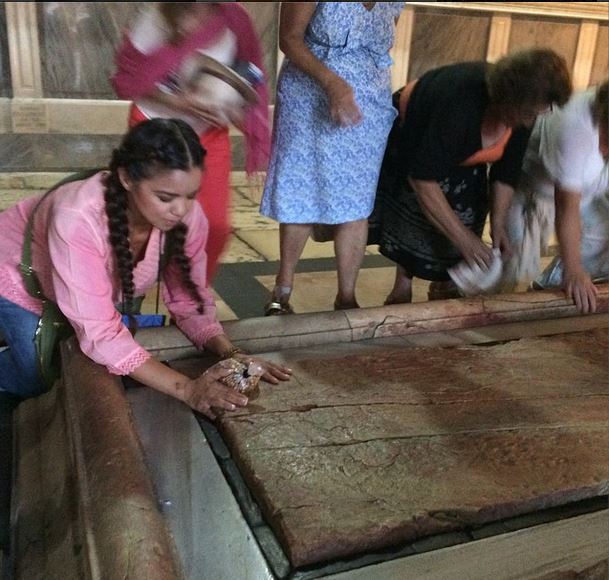 In Jerusalem I visited the Holy Sepulcher, the church built over Mount Calvary. After Jesus was crucified and died, on this rock, they prepared his body for burial by wrapping him in linen and spices

More pictures of my pilgrimage to the Holy Land can be seen on my Instagram. 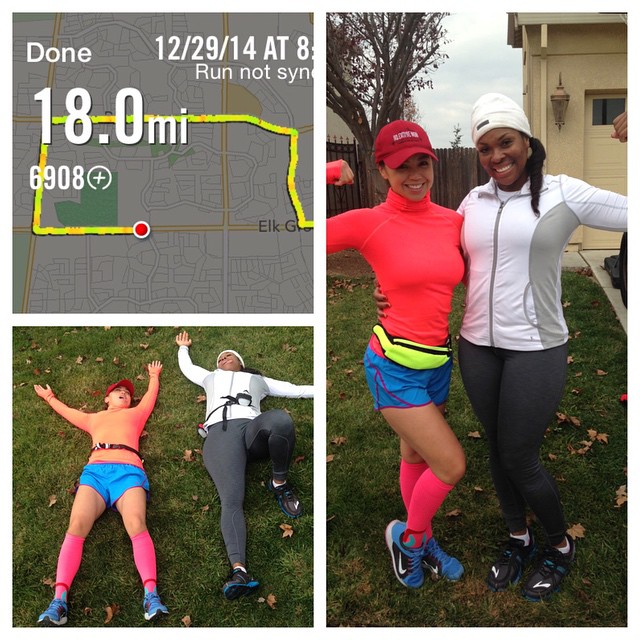 Never thought I could be a runner, but as I close 2014, I can say YES I am!
Join our No Excuse Runners group here and follow this motivational lady to my left here.

All pre-orders received my 60-mine Core Workout DVD (has 3 workouts), a Recipe Booklet and and entry for my 12-week challenge starting January 12th! Order at your favorite online retailers site and fill our the pre-order form on my website for your free gifts. So excited for this!