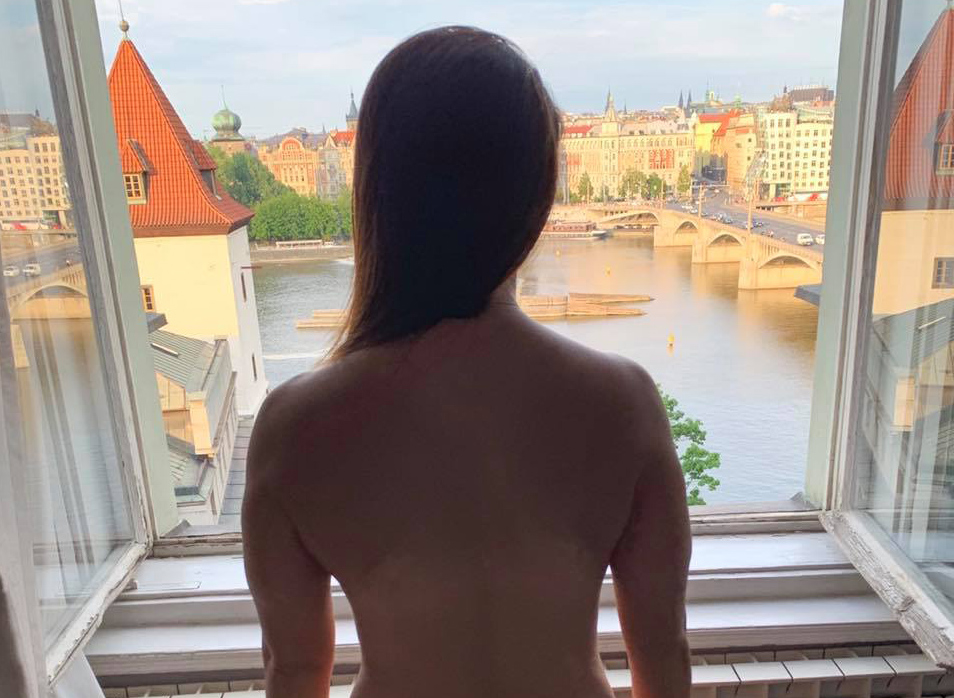 This time two weeks ago I was preparing for my breast explant surgery. I was cool as a cucumber, anxious but ready to get this surgery on the road. I’ve been wanting to explant for years but was nervous about the risks, the recovery and the reality that I wasn’t born with fuller breasts.

The chronic fatigue, joint issues, heart palpitations, chest pressure and inflammation was still aggressively impacting me. Instead of staying nervously awake, I was sleepily in bed at 9pm because I was tired.

When I awoke the next day on Thursday, I took a long hot shower knowing that it may be a few days before I could raise my arms to clean my hair again. We dropped the children to one of my close girlfriends and headed off to the clinic.

Once there, I removed all items except for my pants. I was given an IV and brought to the operation room where they asked me how I was going to spend my Fourth of July. Before I could answer them fully, I fell quickly under anesthesia.

The next thing I remember is a voice waking me up a little less than two hours later in a separate room. The medical assistant asked if I wanted some Sprite and I nodded while my husband walked into the room. I was drowsy, flustered and in pain. The plastic surgeon came in to let me know the surgery was successful and he was able to perform a total capsulectomy (removal of the implant and capsule surrounding it). Despite my doctor’s normal practice in not using drains, I insisted on drains given I have Vons Willebrans, a blood clotting disorder, that made me susceptible to hematomas/internal bleeding.

After 10-15 mins, I was given a bag with instructions, additional gauze and my saline implants – something that has been a part of my body for the majority of my adult life – and I was Ok’d to go home.

When I arrived home I slowly walked myself up to bed. Thankfully our bed adjusts and I was able to sit inclined whenever needed. My chest was tender and my ribs felt like they would break every time I sneezed. While I was in pain, I didn’t consume any pain medication despite some CBD here and there.

The following day we went back to the doctor for my check-up. This was also the first time they undressed my bandages and we had a good look at my breasts. Honestly, I felt nothing. I knew that I would need a few months before my breasts “fluffed” up again. I can’t vouch for my husband though, I’m sure he was shocked!

The medical assistant removed the drains, which my husband felt was too rushed (and awkward to look at) while I felt it was too soon. Most of the women in my FB group had drains from 3-14 days. According to my doctor, fluid will be reabsorbed by the body and flushed through your system, which is why he typically doesn’t use drains. I believed him.

When I came home I rested. Or at least tried to.

If anyone knows my life, it’s very fast paced and I’m rarely idle. It wasn’t long before I felt the need to mop the floor as my husband was anxious to pick up Ranger’s puppy (who we were gifting to our neighbors but keeping for a week).

While he was gone, around 5pm, I noticed that my left breast had become significantly larger. I called my doctor, who was out of town. He initially thought it was just excess blood in my chest that needed to be compressed so it would drain through my body faster. I expressed to him my experience with Hematomas (I had one during implant and another giving birth to our first son) and was certain I needed this to be seen by a physician. Eventually he put me in contact with Dr. Hause and told me to meet with him immediately at his office (which was a few offices down from his).

After arranging for my parents to watch the boys, we quickly drove downtown. It was nearly 7pm and no one was in the building besides Dr. Hause and his daughter. I said I was sorry for disturbing his Friday night plans and he thanked me for saving him from eating pizza (I instantly liked him!)

He prepped me for surgery and talked the entire time, which made me comfortable and at ease. I held his daughter’s hand the entire time, who is a 19-year-old pre-med student. I could hear the blood clots getting suctioned from my breasts and I can smell the burn when he cauterized the bleeds. He removed 300cc of blood from my left chest during this 2-hour emergency hematoma operation, which was longer than my explant surgery.

Not only did he take his time while educating me throughout the whole process, but he also re-stitched my other breast so that the scarring would be minimized.

I left his office around 10pm. I thanked him for his last minute help and he told me to come back at 8am Saturday morning to check in before he brought his stepdaughter to Six Flags. The experience with him felt personal, caring and educational – a complete opposite from my original plastic surgeon.

That night I was in pain, but I still resisted pain meds. The following day we made it to the office and I didn’t show any signs of internal bleeding so I was cleared to go home and continue resting. That weekend we brought home Scout, Ranger’s daughter but my interactions were limited as I laid in bed most of the time watching old movies and bad reality TV shows.

On Monday morning, I had another check-up, which I felt good for. On Tuesday, I walked to my No Excuse Mom workout, where I led the core exercises but didn’t perform anything myself (it normally takes 2-3 months before you can start training again). While I felt decent, I would begin a pattern of overdoing it one day, and paying for it the next. I started battling a summer cold that included symptoms of head congestion, sneezing and fatigue. Despite the cold and the uncomfortable drain on my chest, I still decided to attend a small get together at my youngest sister’s house for Fourth of July. I felt the need to go since she just had her baby a few days prior on June 30th and I hadn’t met her yet.

While at the party I took it easy, but when I’m hours out of bed, I get extremely fatigued. In this case, my summer cold symptoms increased the following day and I felt miserable. That weekend I was determined to get a little active. I went to garage sales with my son on Sat and went to church, lunch and a Rockin’ Jump (a trampoline center) with the kids on Sun. When I came home I knew I overdid it.

And sure enough, my temperature started climbing. My body started getting aches and chills that I hadn’t experienced since I last endured the flu many years ago. My middle son, stayed close by and gave me liquids, medicine and blankets. My husband had a concoction of bone broth he gave me daily. When my temperature rose to 103.2 I started getting worried about infection, but in looking at the incision there weren’t obvious signs of redness, swelling or irritation.

I laid in bed in pain the entire day and night. I remember waking up at 4:30am and not being able to fall back asleep until 6:00am on Monday morning. I was scheduled to see Dr. Hause again at 9:00am and I awoke at 8:45am in a puddle of sweat. My fever broke.

While I felt icky and gross, I only had time to brush my hair back and brush my teeth. My parents drove me and my mother attended my appointment with me (I felt like a child again!) He slowly removed the drain and cut the stitches. I felt free. OMG, it felt amazing to finally be towards recovery. He said to come back in a couple months when my healing was more complete and my breasts were coming into size again.

After taking me to lunch (where I had just a few bites as I was still experiencing body aches and chills) they brought me home where I slept majority of the day.

When I awoke the following day on Tuesday, I felt like I could take over the world. My drains were gone. My fever had subsided. My body felt lighter. I weighed myself and I was 4lbs lighter than I was pre-surgery. I knew that I lost 1.2lbs from the implants alone, but the additional would come from excess fluids in my body due to the inflammation that was ever present in my body.

Without going into too much detail, I was very busy Tuesday. I resumed most of my regular activities as a busy, working mother, except or exercising. As usual however, I paid for it the next day and woke up with head congestion so bad I had to keep napkins nearby everywhere I went.

I have yet to feel the benefits of explanting. From articles and posts I read, women instantly have clarity in their eyes, a robust amount of energy and a big relief in Breast Implant Illness (BII) symptoms.

I’m not there yet.

I’m always exhausted. I sleep 12-15 hours a day. The sickness on top of my breast pain has seemingly crippled me. Intuitively I feel like my body’s immunity has been tempered and I’m undergoing a big detox internally, after all, I underwent two major surgeries and removed a foreign staple in my body that existed for 17 years.

Did I really think it would be that easy of a journey?

So I’m 13 days out. I write this to remember these moments. Never, not even after having children, did I live as slow as I’ve lived these last two weeks. My body has forced me into rest, whether I wanted to or not. Thankfully, I fulfilled much of my travel and work obligations prior to this surgery, although it would be picking up again very soon.

Thankfully I chose to remove these implants while I was young(er) and in good health. This is just a stage, Maria. Just a stage. And just like every like stage, there was a reason why it existed.

When I have the good days from now on…man will they feel good. When I can run, boy will that sprint be delightful. When I can play with the boys, swim in the pool, work without fatigue and truly focus on my goals again, it WILL feel that much sweeter. I have a sense of gratitude I didn’t have prior to this surgery, and for that, I’m Thankful.