Last year I developed a strong friendship with a former acquaintance named Alma Gutierrez. I met her a couple years ago while she was a child care provider. She joined my local mom-me fitness group a couple years ago when she was on play date with the boys she was caring for. She saw a bunch of moms doing lunges and squats at the park. One of our mothers asked, “Would you like to join us?”

Alma said, “No, it’s okay…” In reflection she said she was embarrassed and didn’t want to work out  because she didn’t feel ‘fit’ enough to exercise at the same level. “I was out of shape, overweight and uncomfortable with myself,” recalls Alma. She said she agreed to work out to be polite. In her jeans she started exercising and began to come consistently. Not only did she befriend other moms but she also  utilized the opportunity to work out since that was her only form of exercise at the time. Standing at 5-foot-4 and around 170 pounds, she seemed timid but willing to learn.

Last year I hired her to watch my boys a couple times while I worked. When I realized that having her consistently would be expensive I asked if we can trade services. We agreed that I would train her once a week and she would watch the boys once a week. This was a big deal because I’ve been asked to train people for a lot of money in the past, but never felt any amount equaled my time from my kids or other work projects. While I haven’t been a personal trainer in nearly ten years, I was willing to dust my trainer gloves out of the closet for the sake of having a person willing to care for my 3 kids for a few hours!

At first I can tell she was skeptical. She confessed, “Most of my life I was overweight. I have six sisters and I felt inferior to them because they were all pretty and thinner. I was always the one that stuck out…I felt like I was not like them. I got to a point in my life when it was more noticeable and I couldn’t overlook it anymore.”

When we met on June 1st we weighed in. I explained to her the importance of weighing in despite her fear of doing so, after all, progress is made where progress is measured. On her first day she weighed in at 163lbs. I didn’t just track her weight, I also measured her – because there are several measurements of progress. I gave her a journal to write all her food intake and told her to utilize the first page to write down her goals.

I asked how much she wanted to weigh. She timidly said 145. Then I asked for a target date – and she mentioned she was leaving for Mexico on July 20th.

I could tell she was skeptical. The first thing she said in a slow voice was, “…really?”

REALLY. When it comes to weight loss it’s all about science. I told her to write down what she ate (without giving her any other direction), told her to follow my program rules and to see me same time next week for weigh in and a one hour workout.

The first week I saw that she was eating a lot of Lean Cuisine (she told me she was on the Lean Cuisine diet before). She was also eating a lot of turkey hot dogs and splurging on pizza. I explained to her nutrition, processed foods and eating clean. She didn’t drastically change her eating habits immediately – it happened steadily. Week after week she continued to improve on her diet. She started eating more frequent meals. She eventually started incorporating protein shakes (and she would send me pictures of those she was interested in buying, which had tons of sugar). Eventually she started cutting bread (not all carbs, just bread because that was her trigger food) when she began plateauing.

She started running (she didn’t have a gym membership) and she saw me once a week. Immediately she began dropping 2-3lbs a week as expected. Each week she would come in with her journal and her headphones (she usually ran here from her home which was around 2 miles away). While skeptical at first, when she hit 145lbs the day she left for Mexico she became a believer.

Alma exclaims, “I had a mental makeover. I had such low self-esteem before. I didn’t think I could do this. I never believed in myself. When I weighed in at 145lbs I thought to myself, ‘I can do this! I can really do this!’ My mindset change was the biggest thing in this process. I’m a goal setter now and feel I can achieve whatever I put my mind to…”

On November 5, 2012 she weighed in at 132. She looks younger (really younger) than she did when I first met her. (I always tell her I thought she was older than me – she’s 28, I’m 32!) She runs consistently, eats fairly clean and prioritizes exercise even though her schedule has become inundated with work, school, fiancée and family priorities.

I am so proud of Alma and had to share her amazing story with all of you. At her highest she was at 170ish. Now, she is sitting at nearly 130 with bigger fitness goals: to run a 10k, tighten up her core and become a fitness trainer one day.

What does this story teach you? 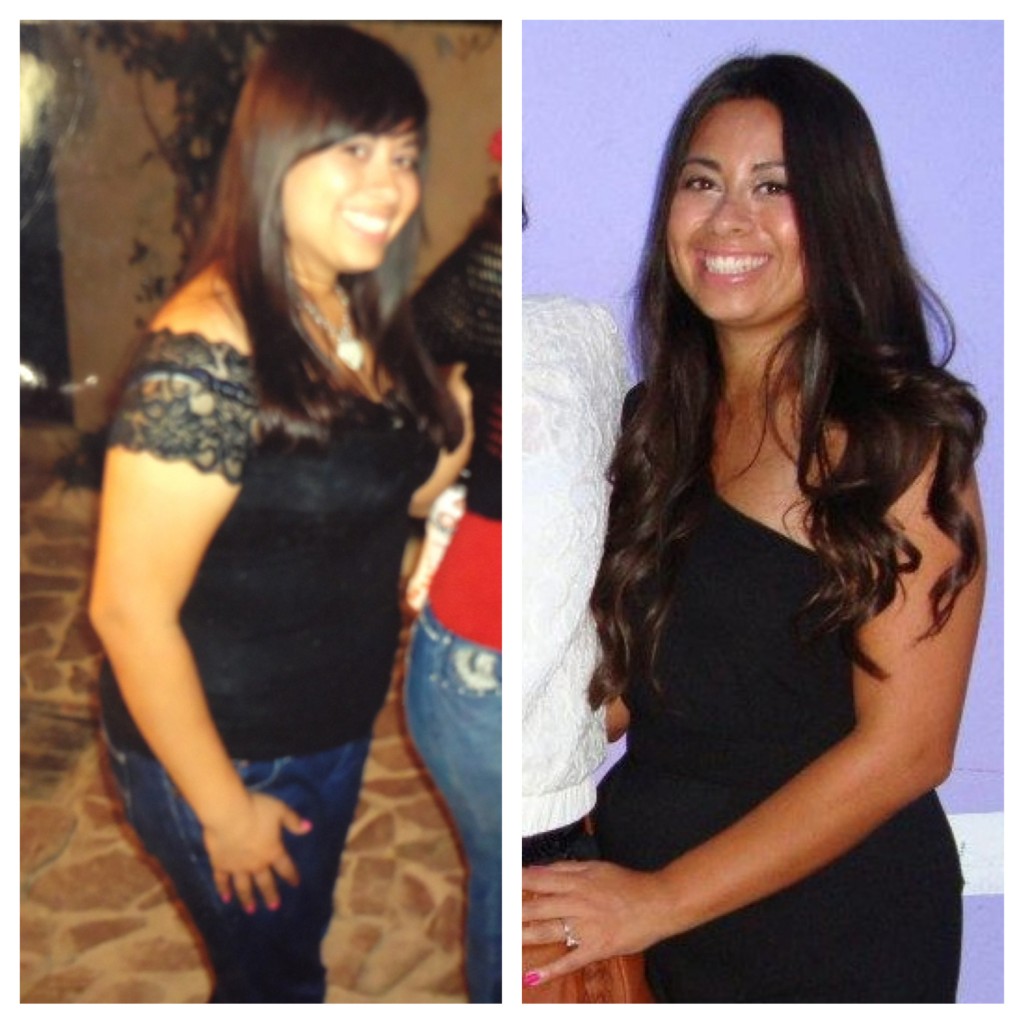 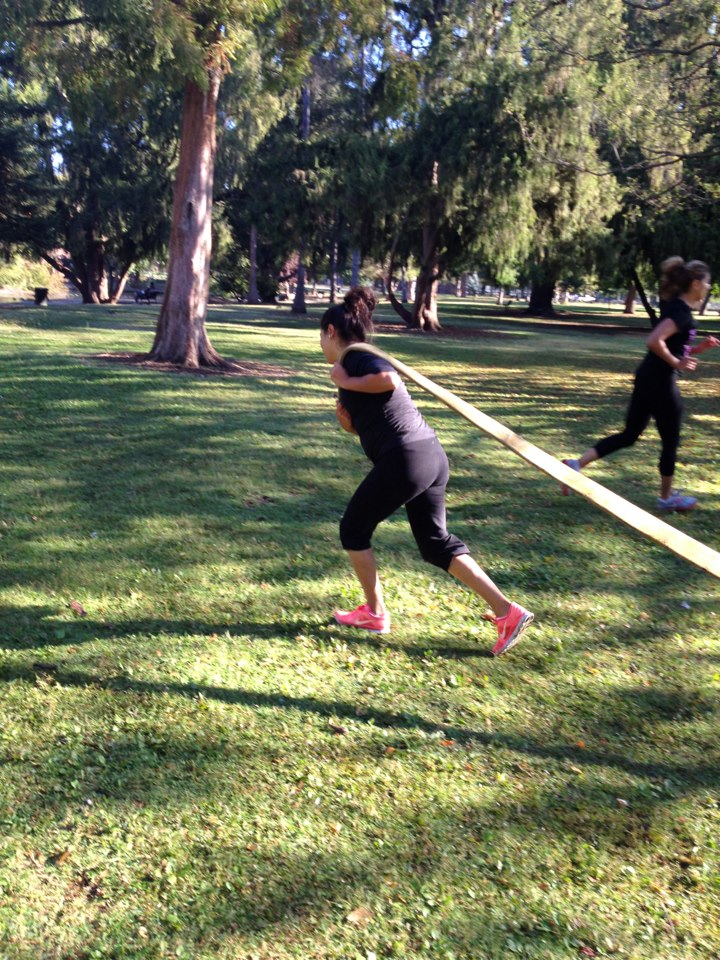 She joined a Saturday bootcamp. So proud of her. 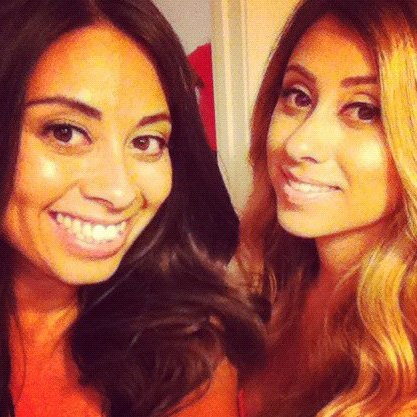 She looks like a whole new person! With her supporter, her sister, Sandra.