4 words I will Never Use. 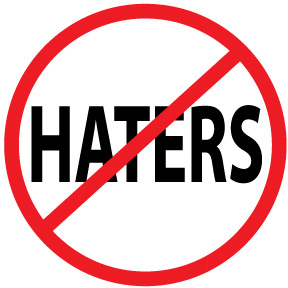 There are certain terms I rarely use in my vocabulary that has been used a lot lately via comments on my Facebook page and website. While I am often portrayed as uncompassionate by viewers, personal friends and family members know I am highly sensitive and very direct.  I don’t view life with negative lenses, I see how people react as a reflection in how they see themselves or what they are intimately experiencing in their own life. Since my influence has expanded I want to make certain messages clear. So here are popular words I would like to stop being associated with:

Hater:  I’ve always disliked that term. Not everyone agrees with your thoughts and beliefs and just because theirs is different does not mean they are a ‘hater’. They are just in disagreement – and just because they disagree does not mean they are opposite from the message (i.e. if one disagrees with my message doesn’t they are fat). I enjoy opposing dialogue because I do learn a great deal from people who maturely debate. When you start to name call or insult, you lack tact and lose the ability to influence the receiver because you created a boundary.

Jealousy: I’m very used to this term because as some know, I was bullied in high school. The second week of Freshman year a group of girls I didn’t know threw orange juice at me at the cafeteria (soaking my clothes and hair). I would continue to receive threats and engage in physical fights with girls I didn’t know. I often cried as a teenager and while I was a ‘pretty cheerleader’ in high school, it was my first experience being bullied by masses even though I was outwardly considered ‘having the upper hand’. Many people told me my offenders were jealous, but I disagreed as I disliked that term because there was no root to that noun.  When I started reading psychology books in the library during lunch (to hide from those who threatened me) I decided that it wasn’t jealousy that caused a negative reaction to me – but insecurity. In high school and in life, people have insecurities (I have them too) and they are intensified when someone has what you feel you lack. It is often said that “comparison is the thief of joy”, for it robs people from seeing their value and personal progress.  So I don’t think people are jealous of me – or jealous of others – I think people don’t value what they have, which breeds insecurity.

Lazy:  I have never said anyone is lazy. I definitely think people get caught up with life, choose the easier routes of sitting and watching The X Factor, rather than working out, but I wouldn’t define that as lazy. I think people are unmotivated. People lack a desire to change, most often because they are in a comfortable environment with comfortable people and comfortable life goals that promote complacency. I see incredible physical transformations when people are motivated by a wedding day, a high school reunion or a beach vacation. I see people deciding to eat a grilled chicken sandwich versus a fried chicken nuggets because they are part of a 12-week transformation contest at work. I strongly feel people are not lazy, people are just not motivated.

Shame: Fat-shaming, fit-shaming or being ashamed…whatever you want to call it, I don’t like saying it. No one should ever feel ashamed for who they are. You can’t create a positive future built on the foundation of shame. The problem I see is we are shifting to a society that accepts being overweight/obese as the norm. When being unhealthy is normalized, it makes people complacent to change. There is a fine line when you say something is ‘unacceptable’ versus being ‘shameful’. I believe that we should not shame those who are challenged with their weight but instead support them and understand where their struggle stems from.

With that said, I hope we can start removing these words from this dialogue I’ve been having regarding fitness in America. It is a not ‘you against me’ conversation. We are truly one in trying to build a healthier community and a healthier nation. We can’t positively promote change if we continue to use these negative words in our conversations.